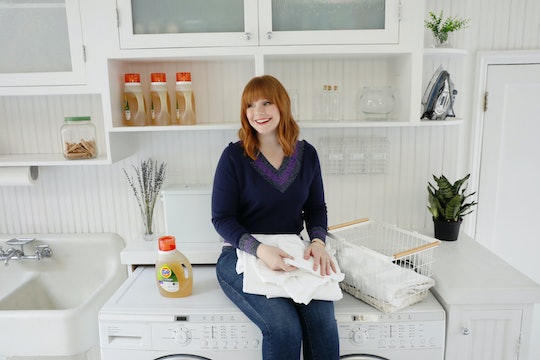 It is sometimes easy to forget that not all celebrities are living large, sitting poolside and being hand fed fresh fruit like a scene out of Entourage. This is the first thought that comes to mind when I sit down with actress Bryce Dallas Howard inside a New York City penthouse to discuss the sustainable lifestyle she is trying to lead as not only a wife and mother, but as a human being in general. In fact, if it weren’t for her bright red hair and recognizable last name, you might not even notice that Bryce is Hollywood royalty (her father is director Ron Howard, also of Happy Days fame). Her pedigree might seem imposing — she fought the dinosaurs and won! — but Bryce Dallas Howard’s daughter, Beatrice, has absolutely no idea that her mommy is such a big deal.

“Something really, really funny happened a few years ago,” Howard tells me, her eyes lighting up at the thought of her daughter, who recently turned 7 years old, according to Parents. “When [Beatrice] was 3, I was doing a movie and I had to leave to go to work, and she was super bummed and crying and all of that.” While I try not to speculate which movie this could have been (my theory: Netflix’s Black Mirror), Howard goes on to explain that she immediately realized this was a “teachable moment” for her second-born.

Howard told little Beatrice: “I need to go to work. I have a responsibility. I made a commitment. I also happen to love it.” Though the words were important to Howard, the mother of two could clearly see they were not resonating with her 3-year-old. “I was like, ‘Hey, Beatrice, do you know what my job is?’ And she looked at me and she was like, ‘Mmm-hmm.’ I said, ‘What?’ And she goes, ‘Laundry.’”

I pride myself on being a professional, especially when speaking to celebrities… but in this moment I can’t help but laugh. Thankfully, Howard finds her own story as funny as I do.

It turns out that the teachable moment wasn’t for Beatrice, it was for Howard. “I realized in that moment that, of course,” she says. “They know what they see. They know what they experience, and she had seen me doing laundry a lot.”

That was when I was modeling myself to her, not when I'm on a talk show or here or whatever. In the house, in the laundry room.

Howard has a personal and professional interest in doing laundry — she is working with Tide purclean to promote a plant-based detergent — and as we discuss her Earth-conscious lifestyle, it’s obvious she is not interested in farming out this work to staff. It’s something she needs her daughter to see her acting on.

“Obviously, you want to habitually get to a place where you're turning off all the lights and you are washing all your clothes in cold water, and when you're brushing your teeth you're turning off the water,” Howard says. “I mean, we're mature human beings and it's important to be responsible in that way, but those require a certain mindfulness.” As she speaks, it’s almost as if she is issuing a warning. After all, Howard knows best what happens when human beings turn their backs on the environment: T-rexes return to prey on weaker mammals, and we women are forced to run through a rainforest in 6-inch heels and pretend it’s a totally normal occurrence.

I think, for me, I constantly feel like I'm just not doing enough. It's like there's always something else that I could do.

During this discussion, Howard taught me something. “When you're doing laundry, you can decrease your carbon footprint by 80 percent just by committing to washing with cold,” she explains to me, someone who thought she was already making the best eco-friendly choices in life. “If you wash in hot water, it’s 80 percent more.”

These are the things that many people aren’t thinking of. Most people are content separating their plastics from their every day trash and feel they are saving the world. Others are talking about crystals and essential oils and pickling their own cabbage. Or better yet, cutting their cotton balls in half and using banana peels to whiten their teeth (a beauty hack published by Style Caster, and shrouded in doubt over at Glamour). Where do these ideas come from, and why do they have society less focused on making wholesale change? Now that I know my carbon footprint isn’t as small as I thought it was, I feel like I still have a lot of work to do — which is something Howard easily related to.

“I think, for me, I constantly feel like I'm just not doing enough. It's like there's always something else that I could do,” she explains. “There's always a new habit or something that can be implemented or a different product or whatever, right?”

Right. After all, little Beatrice is watching.