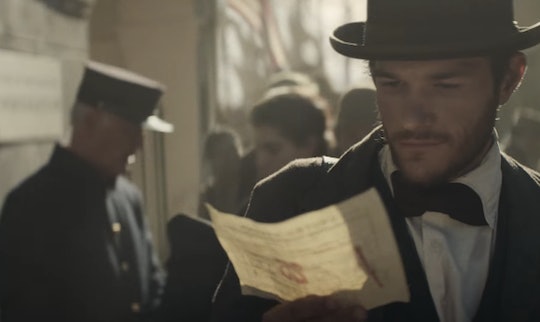 Budweiser’s Super Bowl Ad Will Bring All The Tears

Who knew a Budweiser ad could make you cry? If you didn't, get ready — because this year, Budweiser's Super Bowl ad is about an immigrant's journey, and it might just make you feel all of the feels. The ad is titled "Born the Hard Way," and its description on YouTube simply reads, "This is the story of our founder’s ambitious journey to America in pursuit of his dream: to brew the King of Beers." It has a clear pro-immigration stance, and fans are loving the commercial. (Though Budweiser has stated it isn't meant to have any political connotation or message.)

The ad tells the story of Anheuser-Busch brewery's founder, Adolphus Busch, who left Germany in the 1800s and made his way to the United States. (Spoiler alert: Busch then went on to form the brewery that produces the massively popular Budweiser.) In the ad, viewers see Busch endure turbulent boat rides, get yelled at by strangers — "You're not wanted here!" and "Go back home!" are choice refrains — and walk through freezing rain. Throughout it all, Busch remains steadfast, telling people he wants to brew beer in the United States and eventually unveiling his plans for Budweiser.

Ricardo Marques, vice president of the Budweiser brand, told AdWeek that the commercial wasn't necessarily meant to be a political reflection. "Even though it happened in the 1850s, it’s a story that is super relevant today," he told the magazine. He continued:

There’s really no correlation with anything else that’s happening in the country. We believe this is a universal story that is very relevant today because probably more than any other period in history today the world pulls you in different directions, and it’s never been harder to stick to your guns.

Regardless of Anheuser-Busch's reasons for creating the ad, it's been received with plenty of support from fans sharing the video. Several people are predicting that it will be the most talked about ad after the Super Bowl (to which I can only say thank God, because nobody deserves to live through another Puppy Monkey Baby ad like we all had to last year).

At a time when 20,000 refugees' lives have been cast into uncertainty by a temporary refugee ban from the United States, it's an ad that will resonate with many Americans (and likely rile up a few others). Regardless of the political climate surrounding it, the ad is a heartwarming reminder of the hard journey many immigrants face and of the big dreams that they often bring with them.