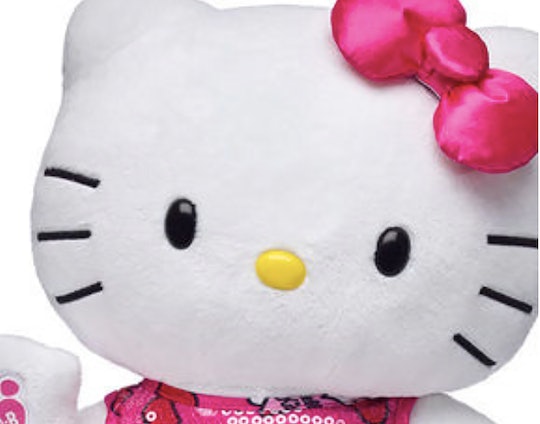 Hello Kitty (aka Kitty White) is an iconic character that many kids across the world treasure, which is why it's exciting that Build-A-Bear has released a Hello Kitty Gift set just in time for the holidays.

Hello Kitty celebrated her 40th birthday in 2014, a big milestone for any cartoon. In those 40 years, Hello Kitty evolved from a tiny image on a coin to a billion dollar empire. The character's parent company, Japanese firm Sanrio, earned $6.5 billion in licensing retail sales in 2015, selling everything from Hello Kitty sneakers to wine, according to CNN.

The Hello Kitty kingdom later expanded to include a Hello Kitty Grand Cafe in Irvine, California that offers "freshly baked cakes, cookies, donuts, seasonal goodies, and handmade hot and iced drinks, along with a selection of Hello Kitty Cafe merchandise," according to Irvine Spectrum Center's website.

Thanks to Saniro's impressive business acumen, Hello Kitty has seen a resurgence in popularity throughout the last few years. And if your child is taken with Hello Kitty's spell, then they'll probably love this Hello Kitty gift set from Build-A-Bear.

Say hello to the perfect gift idea! Hello Kitty believes that you can never have too many friends - and she's right! This world-famous icon looks supercute in her fancy dress and pink sequin flats. This plush stuffed animal gift set makes the perfect gift for Hello Kitty fans!

As for the cost? You can purchase the items individually, or you can buy the whole bundle for $49.

Additionally, there's the option to send the toy already dressed, or you can opt to dress up the doll yourself.

Many people are excited about the promo, with some customers mentioning their plans to buy as many Hello Kitty stuffed toys as possible.

"Awwe Build A Bear brought back," someone said on Twitter. "Hello Kitty, I still have the OG one from wow 2009."

"Build a bear shop will now have Hello Kitty. I wonder how many I will make??" another person commented.

It's not clear if the Hello Kitty gift set is included in Build-A-Bear's "Crazy 8 ReinDEALS." Between Dec. 1-8, "a selection of furry friends—including some of the hottest licensed characters—as well as select clothing items will be $8 each," according to a press release.

Customers who want to take part in the deal, including those who are curious about the Hello Kitty gift set, you should probably sign up for Build-A-Bear's Bonus Club.

When you become a Bonus Club member, you'll receive emails from Build-A-Bear featuring the furry friends and clothing items that are part of the day’s $8 offer. Translation: joining the Bonus Club will give you a head start on each day's sale.

The best part? The Bonus Club (it's free to sign up) sends you promotions and exclusive offers.

"The Build-A-Bear Bonus Club is a fun way for Guests to unlock special perks and exclusive offers! Members earn one point for every dollar spent (before tax, after discounts) in participating U.S., Canada and Puerto Rico Build-A-Bear Workshop locations or online," Build-A-Bear's website states.