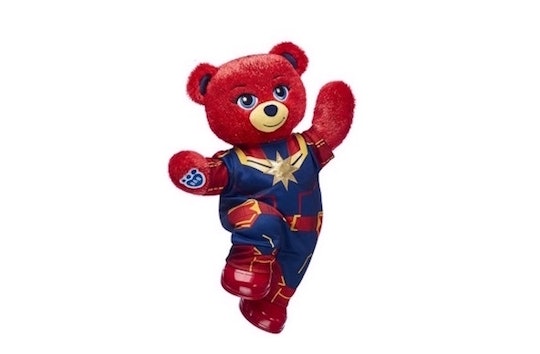 After what seems like years of waiting, it's almost here... Captain Marvel comes out Friday, March 8 and I'm about to lose it. The film, starring Brie Larson, is the first Marvel film with a female headliner – and did I even mention that March 8 is also International Woman's Day? In honor of an occasion that'll be epic in so many different ways, Build-A-Bear has released a Captain Marvel bear that is destined to become the hero of your child's toy collection.

I'll admit, I'm not typically a fan of superhero movies. In fact, my husband has gone solo to every superhero movie that's been released since we met. It's hard for me to invest in make-believe, and whenever on-screen characters are engaged in big fight scenes, I'm usually fighting sleep. That said, Captain Marvel has my full attention. Perhaps it's because I'm a raging feminist, currently pregnant with a daughter, and a huge Brie Larson fan, but everything about Captain Marvel seems special and different. As co-director Anna Spoden explained to Entertainment Weekly, “This is not a superhero who’s perfect or otherworldly or has some godlike connection. But what makes her special is just how human she is. She’s funny, but doesn’t always tell good jokes. And she can be headstrong and reckless and doesn’t always make the perfect decisions for herself. But at her core, she has so much heart and so much humanity — and all of its messiness.” And honestly, what better role model could there be for our daughters?

But now, back to Build-A-Bear. The Captain Marvel bear has gold sparkles throughout her red fur, Captain Marvel graphics on her paws, and is currently retailing for $26. Simply put, she's a beauty. Adopt her as-is, or throw in her iconic Captain Marvel bodysuit and red rubber boots to complete the set for $51 altogether. Of course, if your child already has a beloved Build-A-Bear you can always pick up the bear-sized bodysuit ($18) and boots ($8) separately. Also for sale is Captain Marvel's brown aviator jacket ($13) and her emblazoned tank top ($8).

Obviously, every superhero needs a loyal sidekick. Along with the actual Captain Marvel bear, Build-A-Bear has also released a stuffed version of Goose, Captain Marvel's tabby cat and partner-in-crime. Goose comes pre-stuffed and complete with a collar and name tag ($13). The Captain Marvel bear will quickly become your child's sidekick, and little Goose is the sweetest sidekick to a sidekick.

To sum it up, your kid's going to be obsessed. Yes, it's a teddy bear... but I'm already envisioning all of the badass imaginary adventures it's going to take part in alongside your curious kid. Whether you head to the store with your little one to stuff a Captain Marvel bear yourself or order her iconic bodysuit as a fun surprise for her existing bear, it presents the perfect opportunity to talk to your kiddo about the unlimited power and the possibilities that come with being a strong girl and a strong woman.