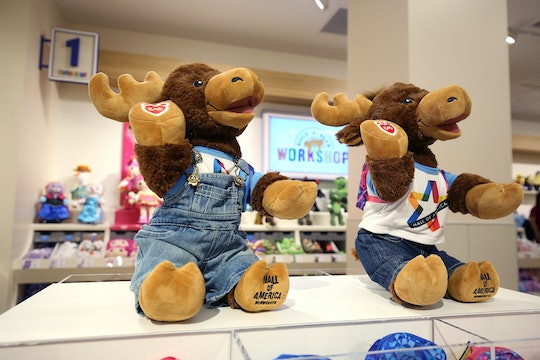 PSA: You Can Score A Cute Build-A-Bear For $8, But Only On These Days In December

Calling all parents looking for holiday deals: Build-A-Bear has a new promotion for December that will likely put you in a very festive mood. I'm talking major price reductions on furry friends galore, people.

Considering how quickly kids can go through toys, it's reasonable for parents to hunt down deals in anticipation of the holiday season. Not only do many parents have strict budgets to adhere to, but it can be frustrating to spend a pretty penny on a toy only to see it discarded a few weeks later.

If you're someone who can relate to these struggles, brace yourself for this amazing deal courtesy of Build-A-Bear — "Crazy 8 ReinDEALS." Between Dec. 1-8, "a selection of furry friends—including some of the hottest licensed characters—as well as select clothing items will be $8 each," according to a press release. Heck yeah.

Build-A-Bear will also offer "$8 off select furry friends throughout the eight-day period."

Considering these supplies might run out before you have the chance to buy, it's probably a good idea to sign up for the store's Bonus Club membership (don't worry, it's 100 percent free).

When you become a Bonus Club member, you'll receive emails from Build-A-Bear featuring the furry friends and clothing items that are part of the day’s $8 offer. Translation: joining the Bonus Club will give you a head start on each day's sale.

Additionally, the Bonus Club has a bunch of perks.

"The Build-A-Bear Bonus Club is a fun way for Guests to unlock special perks and exclusive offers! Members earn one point for every dollar spent (before tax, after discounts) in participating U.S., Canada and Puerto Rico Build-A-Bear Workshop locations or online," Build-A-Bear's website states.

Another awesome part of this promotion? Build-A-Bear plans to donate some of its products to the Marine Toys for Tots Foundation.

For every furry friend purchased in Build-A-Bear Workshop stores and at buildabear.com from Nov. 29 through Dec. 4, one teddy bear will be donated to the Marine Toys for Tots Foundation and given to a child in need—up to 20,000 bears. Shoppers who purchase a furry friend in stores during this timeframe will also receive an 'I Donated' sticker.

But wait — there's more giving going on. Build-A-Bear announced on Wednesday that it's partnering up with John Legend to donate bears to children's charities.

"We teamed up with @johnlegend to donate 500 bears to children’s charities – and you can help share even more!" Build-A-Bear's Twitter account wrote. "For every album of #ALegendaryChristmas sold at U.S. Workshops + online through 12/4, we’ll donate an additional furry friend to a child in need up to 1,000 bears!"

OMG, how cute is Miles here? His presence in this photo makes this partnership especially sweet.

Happy shopping and donating, folks. And don't forget to sign up for Build-A-Bear's Bonus club to receive the latest info regarding its December promotion.