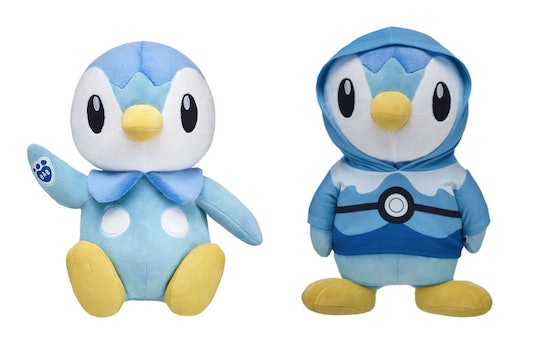 Now that the holidays are right around the corner (can you believe it?) many kids are in the process of drafting up their lists of must-have presents. And if your child is a fan of Pokémon and Build-A-Bear, there's a good chance Build-A-Bear's Pokémon Piplup plush will make their wish list.

Build-A-Bear entered an exciting partnership with Pokémon in November 2015 to release an exclusive Pikachu plush. “Pokémon and Build-A-Bear Workshop both create memorable experiences for fans of all ages,” Monika Salazar, the director of licensing at The Pokémon Company International, said in a statement at the time, according to Toy News. “We are delighted to partner with a brand like Build-A-Bear Workshop that represents fun and friendship.”

The Pikachu doll is sold as a stand-alone toy, or you can pay more for the "Online Exclusive Pikachu Bundle." A bundle will get you "two fun outfits, a 6-in-1 sound and a Build-A-Bear Workshop Exclusive Pokémon Pikachu TCG Card included," according to Build-A-Bear's website. As for the outfits? Kids can dress the iconic character in either a Charzard or Poké Ball hoodie.

Build-A-Bear and Pokémon followed a similar model for its highly-anticipated Piplup plush, a toy that's now available online and in company stores.

"You can now add Piplup to your Pokémon team of Build-A-Bear Workshop plushies, stepping in the footsteps of Pikachu, Charmander, Eevee, Squirtle, Team Rocket’s Meowth, Vulpix, Bulbasaur, Jigglypuff and Alolan Vulpix," according to Pokémon Blog. "The list Pokémon merchandise at Build-A-Bear is expecting to continuously grow. This collaboration also shows no sign of stopping, so fans can look forward to even more goodies!"

If you're interested in buying just the Piplup plush, it retails for $28, according to Build-A-Bear's website. If you want to add a "Dive Ball" hoodie or a "Poké Ball" parka, prepare to pay an extra $12.50.

For those parents who can or want to splurge on the entire Piplup online exclusive bundle, $60 will get you a "Piplup, a Dive Ball Hoodie, a Poké Ball Parka, a 6-in-1 Piplup Sound, and a Build-A-Bear Workshop Exclusive Piplup Pokémon TCG Card," according to NintendoSoup.

Additionally, parents should be aware that the toy "cannot be purchased unstuffed, nor can stuffing adjustments be made," and that "a scent cannot be placed inside this pre-stuffed item," according to Build-A-Bear's website.

Details aside, it's hard to deny the cuteness of the Piplup plush. From Piplup's precious ensembles (the world needs more Pokémon characters dressed up in hoodies, in my opinion) to its sweet little face, there's a lot to love about this toy.

Considering this Piplup is incredibly adorable, there's a good chance parents will want to keep this toy in mind when shopping for the holidays. And it's probably a good idea to get on this trend sooner than later, as some people have already purchased the plush.

"Just picked up my Piplup in store!" one person announced on Twitter.

"I want it," another admirer said about the toy.

"I NEED," someone else tweeted.

Translation: Don't hesitate to snag your very own Piplup before the holiday rush because it's clear this toy is bound to be a hit with kids.