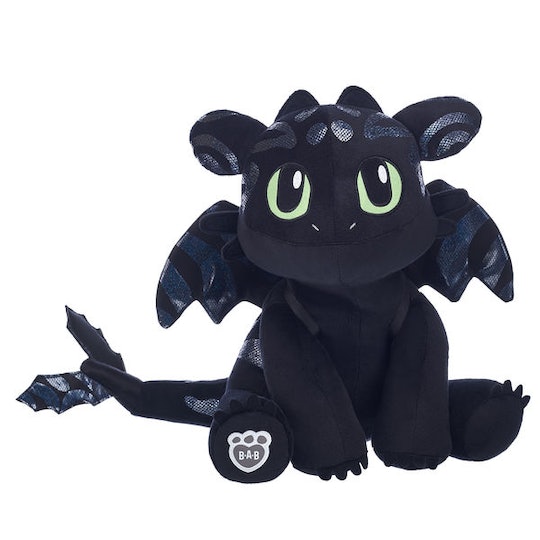 ATTN: Build-A-Bear Has A Special Edition Toothless Plush & It's Beyond Adorable

Is it just me, or did January seem like it lasted for an eternity? The good news is, after making it through the longest government shutdown in U.S. history and a polar vortex, we can finally say it's February! For lovers of animated films, this means the final installment of a beloved trilogy is just around the corner: How to Train Your Dragon: The Hidden World. In celebration of this upcoming Dream Works film, Build-A-Bear is releasing a new stuffed animal. And Build-A-Bear's special edition Toothless from How to Train Your Dragon is simply magical.

As Den of Geek reported, How to Train Your Dragon: The Hidden World will hit theaters on Feb. 22. The movie will be the final chapter of the series — which includes the 2010 original How to Train Your Dragon, as well as How To Train Your Dragon 2, which was released in 2014. “As Hiccup fulfills his dream of creating a peaceful dragon utopia, Toothless’ discovery of an untamed, elusive mate draws the Night Fury away," the movie's description reads on IMDB. "When danger mounts at home and Hiccup’s reign as village chief is tested, both dragon and rider must make impossible decisions to save their kind.”

If you haven't yet checked out the official trailer, it looks like this movie is going to be just as epic as the first two films. See for yourself!

Ahead of the long-anticipated threequel, Build-A-Bear has announced fans can "soar to new heights" with their very own special-edition Toothless for $35, according to PopSugar. Complete with a "shiny dragon glow," according to the description on Build-A-Bear's website, this stuffed animal would be a perfect companion to take to the movie itself later this month. I mean, just look how adorable he is.

Based on reactions so far on Twitter, Build-A-Bear lovers are already smitten. One Twitter user commented with a GIF of SpongeBob exclaiming, "I neeeeeeeed it!"

Another Twitter user wrote, "Can someone get me a toothless build-a-bear, or is that asking for too much?"

Yet another person simply commented, "Omg," along with a heart-eyes face emoji.

According to ComicBook.com, this special-edition Toothless comes on the heels of the release of a different Toothless design, as well as a light fury last month. Other versions have been released leading up to prior movies, as well. This dragon is timeless — and not only for kids, in case you were wondering. Back in 2017, one Twitter user wrote, "Yes, I am a 21 year old "adult" with a build-a-bear Toothless because my obsession with animated movies and dragons is insane."

Another Twitter user wrote, "For Valentine's Day im gonna go to build-a-bear, build myself a toothless stuffed animal and wrap it up in pink paper then give it to myself." Actually, that sounds like a perfect plan to me.

Can someone please hide my wallet so I don't end up with one of these stuffed dragons for myself and each of my four children? Seriously, though, I'm so excited about this movie! If you need to find me, I'll be re-watching the first two How to Train Your Dragon DVDs with my kids in preparation for hitting the movie theater later this month.

More Like This
From Captions To Gifts, These Are All The Kindergarten Graduation Ideas You Need
Celebrate The Class Of 2022 With These Festive Graduation Car Decorations
There's Now A Barbie Doll With Behind-The-Ear Hearing Aids For The First Time Ever
Are You There God? It’s Me, Margaret Is Finally Heading To The Big Screen