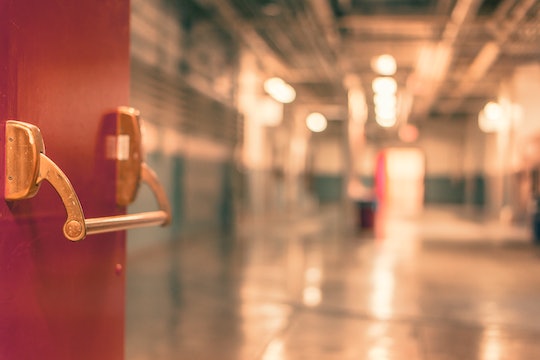 Let's all gather together and give a long, slow clap for xenophobia, since it's apparently the real winner of the 2016 election. On Monday, some students were greeted with racist, pro-Trump graffiti at a Spanish language elementary school. Because when it comes to making America great, shoving hate speech in pre-pubescent children's faces is the logical first step, haven't you heard? It wasn't just pro-Trump graffiti. The phrase "build the wall higher" also accompanied an artful "Trump 2016" on the school's exterior. It was everywhere.

Jeanne Acuña, the principal of Cali Calmecac Language Academy in Windsor, California, told Fusion that the words were sprayed on walls, stairs, and doors. It was even sprayed on garbage cans, which might be the best place for American voters to toss all of their hopes for humanity after this election the way things are going. I jest, of course, because hope is alive and well in America.

Specifically in places like Cali Calmecac Academy, a language immersion school where the students, grades K-8, are taught in both English and Spanish. According to Acuña, 75 percent of the total 1,100 students are Latino. Next weekend, the students and community are installing a rain water tank on the roof of the school to collect water to irrigate their school garden in the winter season. They have "walking school bus Wednesdays," where students are invited to meet up close to the school and walk together to make the morning bell. It's a good way to "catch up with friends, and get fresh air and exercise," according to their website.

Obviously, not someone in the community is not feeling all those wholesome, hopeful, educational vibes. Nor did they learn very good penmanship, as seen below.

If the Trump campaign really wants to pretend that they're reaching out to Hispanic and Latino voters, they might want to consider paying for that gosh darned rain tank or the removal of the graffiti. Because, really, the cost of the graffiti removal is actually what Republicans in the area are worried about. Yes, really.

Sonoma County Republican Party chairwoman Edelweiss Geary told Fox News Latino, “I’m real sorry about that. That’s not a good message. It’s taxpayer money that gets wasted, it’s not good. Cali Calmecac has been there for many years." She added, "I would certainly say no Republican was involved.”

Maybe it wasn't someone who is registered with the Republican party that vandalized the school. But the Republican party did nominate Donald Trump, a presidential candidate who has gained popularity for wanting to build a free Mexican border wall and called Mexican immigrants rapists and drug dealers. "I'm real sorry about that" just doesn't really cut it this close to Election Day.

Acuña is open-minded and believes that it's “probably a really misguided teenager ... kind of an impulsive prank," according to Fusion. But that's kind of the point. The diplomatic principal added:

This is going straight to little kids. The janitor tried his best to get as much of it covered as he can in the morning, but the kids still saw it, and they’re really rattled by it. They feel violated. They feel threatened by it, because it could be something that violates their parents, or affects their family. It’s a really ugly feeling.

Sure, it's not Trump's fault that someone vandalized an elementary school with racist, threatening words. But Trump's ideas are trickling down to even the youngest Americans. One student, 9-year-old Cienna Rodriguez told KTVU, a local Fox affiliate in the area, "If they build a wall, all my cousins have to go back to Mexico and a lot of people I know have to go back. So I don’t want it.” Some 9 year olds are scared of monsters under the bed; Others have a very real and prescient fear that their family will be deported by the time they get home from volunteering in the school garden.

Cali Calmecac's Behavior Expectations, for children in grades K-8, are listed on their website. They read:

Maybe those should be federal guidelines for presidential candidates and their supporters in the future. Or at least something to think about on the way to the polls this November.

More Like This
Chris Pratt & Katherine Schwarzenegger Welcomed A Baby Girl With The Prettiest Name
Mom Gave Birth On The Side Of The Road... With Her Five Other Kids In The Car
Operation Fly Formula Begins With 78,000 Pounds Of Baby Formula
Prince George Has Apparently Known He'll Be King Someday For A While Now