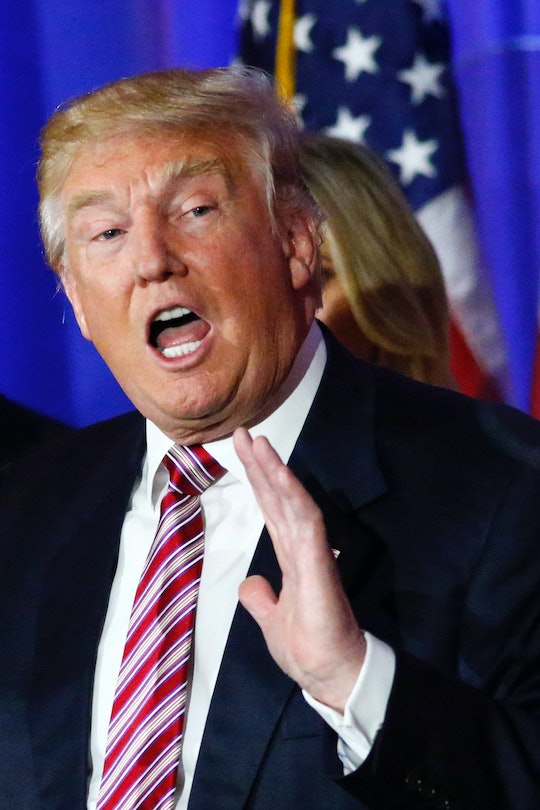 Presumptive Republican presidential nominee Donald Trump has been called many things by his critics, and thanks to his unapologetic verbal attacks on those who disagree with him, "bully" is certainly one of them. But, according to The Guardian, Trump's campaign appears to have led to the emergence of another type of bullying: on America's school playgrounds. A recent survey by the Southern Poverty Law Center of "approximately 2,000 K through 12 teachers," found that students are using Donald Trump's comments to bully students of color, particularly Mexicans and Muslims. The survey found that, even children as young as 5 and 6 years old, are telling their classmates that Donald Trump will deport them, and they reference the wall he often talks about building along the border with Mexico. Other students taunt non-white classmates by telling them to "speak English," or just by shouting "Trump," which has in itself became a shorthand for racism and exclusion.

And while it may seem like something like that would only happen in super-conservative, ultra-white areas with high numbers of Trump supporters, the survey actually found that this bullying is happening pretty much everywhere — even in areas normally thought to be diverse and progressive. Tracey Iglehart, a teacher at Rosa Parks elementary school in Berkeley, California, told The Guardian,

Berkeley is not an area where there are Trump supporters...[but students have] said things like ‘you’ll get deported’, ‘you weren’t born here’ and ‘you were born in a Taco Bell’. They may not know exactly what it means, but they know it’s powerful language.

Trump's bid for president, the survey findings found, is "producing an alarming level of fear and anxiety among children of color...in the classroom," and some of the examples cited by teachers who volunteered to take the study were particularly heartbreaking. One middle school teacher wrote, according to the SPLC:

My students are terrified of Donald Trump. They think that if he’s elected, all black people will get sent back to Africa.

Another teacher, this time at a high school in North Carolina, said she,

[has] Latino students who carry their birth certificates and Social Security cards to school because they are afraid they will be deported.

And a Tennessee kindergarten teacher even wrote of one Latino student in her class being so afraid and hurt by comments from classmates about being deported that he asks, daily, “Is the wall here yet?”

Unsurprisingly, Muslim students are also feeling the so-called "Trump Effect" at school. The report found that Muslim students are often referred to as "terrorists" or "ISIS," and one teacher surveyed commented that a fifth grader told a Muslim student that "he was supporting Donald Trump because he was going to kill all of the Muslims if he became president."

According to Education Week, American Federation of Teachers president Randi Weingarten told reporters in May that Trump has,

Already done tremendous damage to education. He's created an environment of scapegoating and demonizing. It is influencing children and it is influencing behavior in schools. It is making it much, much harder for us.

The SPLC survey isn't the first time that parents and teachers have spoken out about Trump-inspired harassment happening in school environments. One account, by Virginia mother Evelyn Momplaisir, went viral on social media after she posted about a call she received from her son's teacher about comments made about her son by two third-graders in his class:

I just got a call from my son’s teacher giving me a heads up that two of his classmates decided to point out the ‘immigrants’ in the class who would be sent ‘home’ when Trump becomes president. They singled him out and were pointing and laughing at him as one who would have to leave because of the color of his skin. In third grade . . . in Fairfax County . . . in 2016!

The biggest threat of the "Trump Effect" though might just be that, now that these thoughts have taken hold in children's minds across the country, they won't necessarily just go away if Trump loses the election in November. What the comments of teachers, parents. and students show is that, his position isn't just damaging in the moment — it's having long-term effects too, suggesting to children (and, well, plenty of adults), that it's OK not only to think racist and xenophobic thoughts, but to say them out loud.

Trump, his supporters, and the children who are absorbing his messages and spewing them out in the classroom might consider his outrageous and offensive comments to be "telling it like it is," and fighting back against "political correctness," to "make America great again." But what educators and parents are seeing loud and clear is that all it really is is bullying and racism. And that is a huge step back for the entire country.