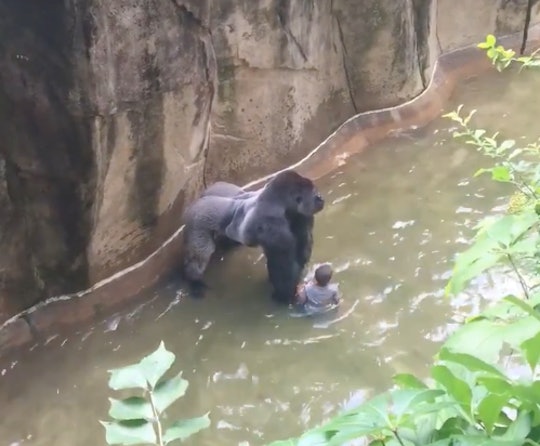 The Cincinnati Zoo and Botanical Garden has temporarily shut down its gorilla area, after a tense moment 0n Saturday in which a 4-year-old boy fell into a gorilla enclosure. The boy was briefly dragged down the enclosure's moat by 17-year-old gorilla Harambe, who was then shot by zoo officials in an attempt to retrieve the child. For parents and animal lovers around the world, it's a harrowing story with a tragic ending, and one that could have easily been avoided. Unfortunately, some commenters have taken to bullying the boy's mother, saying that if she had been properly minding her child, the endangered western lowland gorilla wouldn't have been killed.

A petition has already been started by critics who believe the child's parents were negligent and "want the parents to be held accountable for the lack of supervision and negligence that caused Harambe to lose his life." They also believe "this negligence may be reflective of the child's home situation" and would like a home investigation carried out by Hamilton County Child Protection Services and Cincinnati Police Department.

Bystander Kimberley Ann Perkins O'Connor told NBC that she heard the boy joking with his mother, who was watching several other children, about wanting to climb into the enclosure. "The little boy himself had already been talking about wanting to ... get in the water," O'Connor said. "The mother's like, 'No, you're not, no, you're not.'"

While I completely understand the public's devastation at Harambe's death — and I'm in agreement that it was a senseless, unnecessary death — people are misplacing their anger in blaming the child's mother. She had already warned him against entering the enclosure and seemingly tried to stop him; Not to mention, children are notorious for breaking rules and getting into trouble. What parent hasn't turned their back for a quick second only to have their wily kid squirrel into a scary situation? Mothers only have one set of hands and eyes, and unfortunately, things happen even to the best of parents.

As family-friendly entertainment, the zoo should have had a secondary barrier, although zoo officials argued that their current set-up had followed safety regulations and existed without incident for 38 years. However, in any situation where a kid could be unsupervised for a few seconds — whether a parent takes a call, a child willfully runs away from their parents, or a student slips away from his school group — they should not be able to access animals at the zoo by any means. The zoo's current set-up already had a tragic ending, but it could have been worse: The boy's 10-foot fall into the enclosure, or the gorilla's subsequent treatment of him, could have ended in the boy's death.

Another thing to consider after the Cincinnati Zoo incident is zoos themselves. While many of them claim to promote conservation and education, they still confine wild animals to enclosed spaces, and they open the animals' lives up to potentially dangerous contact with humans. Animals in zoos are still wild, undomesticated creatures, and unfortunately, they do have the potential to hurt people. When we bring them into our environment and place them in unnatural and often stressful living situations, we take responsibility for them — but unfortunately, in situations like this, they bear the brunt of it.

Instead of bullying a mother for being human, concerned viewers of the Cincinnati Zoo video should be questioning the zoo's safety — and, perhaps, whether they really want to be taking their children to zoos at all.