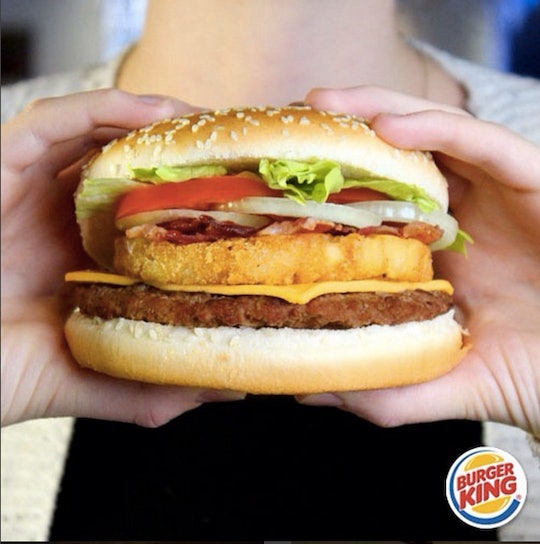 There’s nothing more American than a burger and a beer, amiright? Which is why it’s totally not fair that Burger King wants to serve beer in the U.K. Shouldn’t we be getting first dibs on that? According to the Daily Mail, the fast food chain announced today that it has applied for licenses to serve alcohol at four trial locations in the U.K. If approved, BK plans on serving American beers in plastic bottles, seven days a week from 10 a.m. until 11 p.m. at night. Once they get going serving brews at the trial locations in Newcastle-under-Lyme, Blackpool, Hull, and Bury St Edmunds they can apply for more liquor licenses all over the place. And they'd have a better shot talking U.S. liquor boards into seeing it our way. I mean, beer definitely counts as a food group, right?

As awesome as this news may sound, it isn’t the first time Burger King has tried offering booze with their Whopper meals. Way back in 2010, they opened up “Whopper Bars” in Times Square, NYC and in Miami Beach. The Whopper Bar in New York City was closed for health violations like not having soap in the bathroom (like most places in Times Square, no surprise there); and they were never able to obtain a liquor license anyway. The BK Whopper Bar in Miami was able to snag a permit to sell brews and is actually still in business. But that’s sort of why Burger King is trying the concept again, just overseas. Applying and being approved for liquor licenses is a huge bureaucratic mess, since liquor laws vary from state to state in the U.S. and it would be pretty tough to make sure every location was able to make good on the offer. But after a solid trial run across the pond and working out the kinks, it could work. Why should it be so hard to get a drink anyway?

They aren’t the first fast food joint to get into the bar game, either. As of September, Taco Bell serves margaritas at a Chicago location and Starbucks has started serving wine in about 100 locations nationwide. Being able to order a frozen margarita with your Nachos Bel Grande or a Budweiser with a dollar menu burger makes it almost worth the calories. While many still tend to look down on fast food and go for “healthier” options like Chipotle, it turns out that most Americans eat fast food at least once a month. And that’s nothing to be ashamed of — especially when you’re wrangling kids to and from school/soccer practice/ and finally remember you need to... well, feed your kids. But being able to order a craft beer (as long as it wasn’t at the drive-thru) with some chicken nuggets? Getting a glass of wine at Starbucks with a quick sammie? Not that would be a total gamechanger.

Which is why, no matter how you feel about all-beef patties, keep an eye out on Burger King’s beer program overseas and cross your fingers it works out. Why should they get to have all the fun? If more fast food joints start offering happy hours and happy meals, weeknight dinners just got a whole lot easier.

More Like This
Here’s What You Need To Know About That Viral 1960s Baby Formula “Recipe”
Kelly Ripa Loves A Sunday Dinner Date With Her Grown-Up Kids
Kate Middleton Explains Why Her Kids Couldn't Attend The Top Gun: Maverick Premiere
Why Prince Harry Feels Lucky To Be A "Father With A Platform"