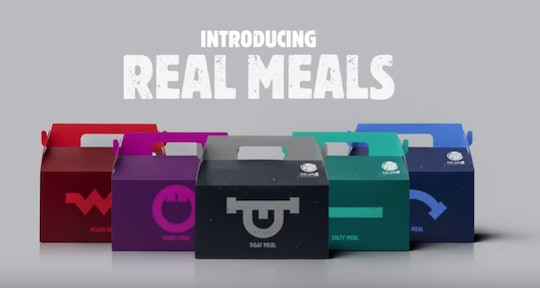 One of our favorite fast food joints is making some serious progress when it comes to everything from marketing to more diverse menu options (they also recently announced their addition of the Impossible Whopper, which is a vegan sandwich). Someone is Kris Jenner'ing this company, and they're here to make some strides for emotional health as well as nutritional. Burger King's "real meals" are here to teach people that it's OK to have a variety of emotions, not only happiness.

Though that's still a pretty big deal, especially in a world that still has so far to go in terms of understanding the value of a healthy emotional range.

"Not everyone wakes up feeling happy," their promo for the campaign begins. "Sometimes you feel scared, scared, crappy. All that I ask is that you let me feel your way." The video goes onto show different individuals in challenging situations: one young woman who is eager to leave her hometown, another whose boss is a "creep," one young man who just got ghosted, and another young mother who says she's "too young" to raise her daughter.

Throughout the different individuals sharing their stories, the group sings in chorus: "All I ask is that you let me feel my way."

In a press release, the company released an official statement explaining why they feel this is an important campaign right now, TODAY reported. “A natural extension of encouraging people to 'be their way' is encouraging them to 'feel their way.' With the pervasive nature of social media, there is so much pressure to appear happy and perfect," the statement read. "With Real Meals, the Burger King brand celebrates being yourself and feeling however you want to feel." In addition, a donation was made to Mental Health America from the company.

Though it is of course a very clever marketing strategy that has already generated a lot of attention, it's got a really powerful message at its core.

The truth is that we often feel an immense amount of pressure to be happy and well, when that actually has a pretty detrimental impact on our emotional health. It is so much better to be forthcoming about the times in our lives in which we feel angry, sad, defeated or even excited, so that we can all learn to process feelings more healthfully.

Though there's more work to be done, a world in which even fast food meals can come in packaging that reflects their honest emotions is surely a step forward.