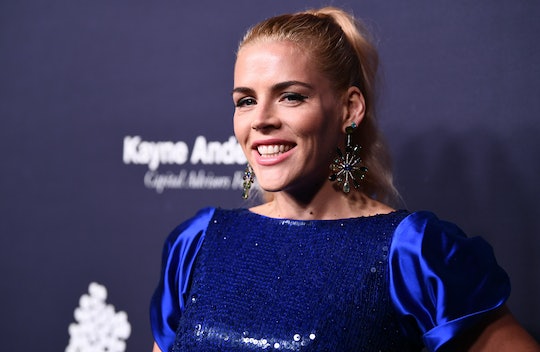 Busy Philipps Lost Her Kid's Fave Toys, & The Mom Guilt Is So Relatable

If you follow Busy Philipps on social media, you probably noticed that her Easter weekend started off on a high note. Philipps, who jetted off to Hawaii for the holiday, took to Instagram on Sunday to share a ton of cute snaps from the getaway, and it's clear she had a blast. Unfortunately for Philipps, however, the good times came crashing down on Monday when she realized she made a common parenting mistake. Through tears, Busy Philipps admitted that she lost her kid's toys — an error she referred to as a "total parental fail." Needless to say, Philipps is absolutely heartbroken, and there's a good chance many parents will relate to her mom guilt.

Philipps, a mom to two girls — 9-year-old Birdie and 4-year-old Cricket — has never shied away from exposing her her parenting gaffes. So, it's really no surprise that she took to Instagram on Monday to get real about how she accidentally left behind Birdie's two beloved stuffed bears at their hotel. Sitting on what appears to be a bathroom floor, a distressed and teary-eyed Philipps started her video off by saying, according to the Daily Mail: "Guys I ended our wonderful family vacation with a total parental fail. Birdie's favorite bear, Radar, and her other bear Flat Bear were left." Yep, this sounds like the beginning of an all too common parenting anecdote.

Upon realizing her mistake, Philipps immediately called housekeeping. “I called and housekeeping haven’t found them, so I think they were really tangled up in the sheets and they just went to the place where they wash the sheets and so hopefully tomorrow they’ll find them,” Philipps revealed, as reported by Us Weekly.

Still, Philipps wasn't soothed by the possibility that the treasured bears would soon resurface, especially since Radar belonged to her when she was a kid. Apparently, Birdie saw the bear as her most prized possession because of its sweet connection to Philipps. "She [Birdie] was just so heartbroken, and I was, like, I knew it as soon as I opened up the suitcase to get Cricket’s stuff for bed," an exasperated Philipps recalled, according to Entertainment Tonight Canada. “I was like, I didn’t see Radar and Flat Bear. I was like, f**k, f**k, f**k.’”

Oh, and if you're wondering how this mixup happened, look no further than a little thing called life. Philipps revealed that there was a lot of confusion that morning because it was Easter and she had decided to split the packing responsibilities with her husband, Marc Silverstein.

Of course, losing a stuffed animal isn't that big of a deal when you compare it to all the other problems out there. And while Busy did cop to having "perspective" on the parenting snafu, it didn't stop her from feeling a world of guilt. “I know it’s just a mistake and these things happen but f**k … it’s the worst when you’re a parent and it’s your responsibility to keep everything straight," Busy explained, as captured by People. Busy also admitted in the video story that she feels like "such a bad mom."

Aww. Does anyone else want to send Philipps a virtual hug right now or is it just me?

Following Philipps' tearful admission (seriously, there were *a lot* of tears) concerned fans came out of the woodwork to inquire about the bears and to lend their support. I mean, many parents probably understand how Philipps' is feeling right? It's way too easy to forget your kid's toy somewhere. It happens.

Man, I just *love* when other parents come out in support of fellow parents in times like these. Although the mistake is small in the grand scheme of things, it doesn't make the incident any less heartbreaking or painful — which is why it's nice to see that so many parents out there just get it.

So, here's to hoping Radar and Flat Bear make it home safely. Their return means as just as much to Birdie as it does to Philipps.