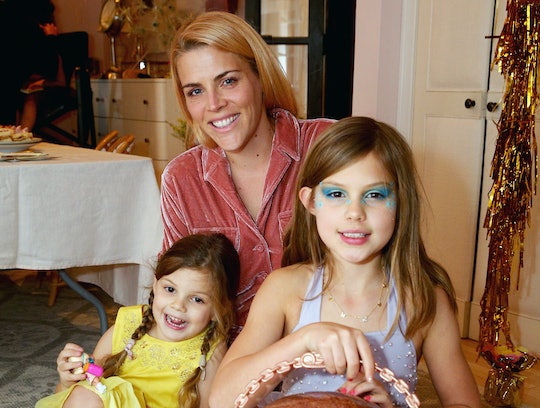 Busy Philipps On The Border Separation Policy: We Need To “Do As Much As We Can” To Take Action

She is pondering the cruelty taking place at the southern U.S. border, following a May 7 Department of Justice directive to reportedly prosecute all adults who cross the border with misdemeanors, as NPR reported — and to separate them from their children in the process. "As a parent, my heart is breaking," Philipps tells Romper by phone.

In the past few days, Philipps has interspersed her regular posts of comically sweaty fitness workouts and witty selfies with a call for her 1 million Instagram followers to donate to Baby2Baby, a donation registry that goes to kids in need, for a special shipment designated for the children detained by the border.

"I was looking for a way to try to bring a modicum of comfort to these kids," she explains, "I called the charity that I work with here in L.A., like 'What can we do, how can we get these kids something other than mylar blankets?'"

Seeking asylum is not illegal. People are trying to escape really terrible conditions in their home countries; they're not robbing people at gunpoint, they're trying to find a better life for their families.

The result is that Baby2Baby, in conjunction with KIND (Kids In Need of Defense), an advocacy and legal services organization, will deliver essentials — "blankets underwear socks shoes t-shirts, sweatpants, small sort of comfort items" — to some of the reported 2,000 or so immigrant children who have been detained by the Department of Homeland Security, per DHS' own data.

Philipps says that some 6,000 articles had been donated off an Amazon Baby2Baby registry the day before, and updates the link in her profile to a new link on Target.com while on the phone. The week of June 25, she planned to go to the warehouse to "help them put together these bundles in duffel bags to deliver to the kids." As she speaks on the topic, her voice breaks.

I don't really give a f**k who started the policy. I'm not in a position to point fingers, I just think it needs to be ended and reversed immediately.

It isn't just the inhumane policy that cuts deep, she explains, but also the messaging around migrant rights; the way the families being detained are being described.

"Seeking asylum is not illegal. People are trying to escape really terrible conditions in their home countries; they're not robbing people at gunpoint, they're trying to find a better life for their families, and I'm incredibly heartbroken by this policy that has been enacted. I don't really give a f**k who started the policy. I'm not in a position to point fingers, I just think it needs to be ended and reversed immediately, so..." She pauses for a second, "that's where I stand on that."

Philipps' capacity to speak to migrant rights partway through a conversation about making friends with other school moms offers a window into the persona that has recently earned her a book deal (her memoir comes out in October from Simon & Schuster) and a talk show. If she was once the penultimate TV bestie, her appeal has vastly eclipsed the sidekick roles she once played. Her openness — her willingness to go off-script — is a key reason.

During a week in which even former First Lady Laura Bush decried the month-old "zero tolerance" policy implemented by the Trump administration as "cruel ... immoral," Philipps hoped people would "call our senators and do as much as we can in that regard to take action," alongside supporting relief measures for those swept up in the initiative.

Late the same day, Congressional Republicans pledged to pass an immigration reform package that would appease the president, who himself blamed Democrats for the state of immigration laws and suggested that he had no choice but to cauterize ongoing migration flows by separating children from their parents — many of whom are asylum-seekers — in an extreme act of so-called "deterrence."

"The president can end this crisis with the flick of his pen, and he needs to do so now,” Senator Chuck Schumer said in a statement reported on by the New York Times.

As politicians wave off personal responsibility for the state of U.S. human rights, Philipps remains focused on her one key concern: other people.

Her Instagram is a digital hug-wall of friends, cast mates, and family, Philipps seemingly unable to disguise her true feelings about any of them: "My TV college boyfriend," she captioned a recent 'gram of Joshua Jackson, her one-time Dawson's Creek love interest. But the key theme is family.

"Miss these chickens SO MUCH." Philipps wrote in a March 13 Instagram post of her daughters Birdie, 9, and Cricket, 4, while she traveled.

Being separated for longer was unfathomable.

Today is World Refugee Day. To support the 50 million children uprooted across the globe, you can donate to UNICEF here.