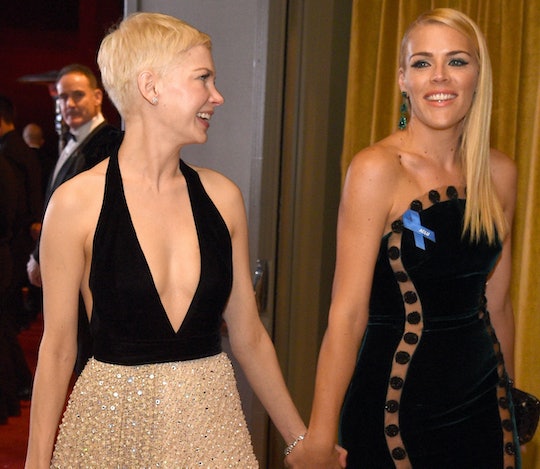 Busy Philipps On Radical Realness & Why Dads Have It Better

Much of America smelled like a slow-cooking diaper pail when Romper sat down with Busy Philipps in a room scented with that ineffable rich-person perfume that brings to mind peonies and linen shifts and "family offices." We were supposed to meet at a nearby playground and chat while we creaked back and forth on the swings like two overgrown teens, but a heat advisory saw the experiment called off. Philipps wasn't sad about it. "I don't wish that at all on anyone," she said, gesturing toward the bilious world below us.

I know this sounds ivory towerish, but Philipps' posts on Instagram show that she is in the trenches of life just like you — there is $7 juice, yes, but she is there worrying about her family, worrying about cramming in work, and, this week, about her daughter's first time at sleep-away camp.

"This is a really big deal in our household," she says of her daughter Birdie. "She's, like, essentially an un-sleep-trained 10-year-old."

Birdie is not one for sleepovers, but it was her idea to try camp. "I have been struggling, because I was worried, would she be OK? — I'm going to start crying," Philipps says as she looks at the ceiling and wills the tears back into her eyes with her fingers, which are capped by a neon-pink manicure, "and the first night we got a call that she was, like, freaking out and I'm here working and and my husband is in Los Angeles with our little one, and there was nothing we could do."

Her daughter had a better day after that and was happy the following night, but the worry, or the anxiety, Philipps says, is unending for moms.

"There is a piece of your brain that is, how do I keep this human alive?" she says. "I think most moms feel that thing — probably because it's biological — in a way that most dads I know don't."

I wish I were a dad. I wish I could turn that part of my brain off.

She says her husband, filmmaker Marc Silverstein, with whom she has Birdie, 10, and Cricket, 5, is an "incredibly" hands-on parent, but immune to that particular tendency toward emotional overdrive.

"I wish I were a dad. I wish I could turn that part of my brain off, it would be great," she laughs.

Philipps' transformation from sidekick in Freaks and Geeks and Dawson's Creek to television host, author, and influencer can be traced to her presence on Instagram, where her stories reach 1.1 million followers, many of them moms who are drawn to her "realness," as we are calling it. There are 18,000 posts tagged with #motherhoodunfiltered on Instagram, part of a broad effort to respond to the rise of the aspirational mommy internet. Philipps' Instagram feed takes followers into her hospital room and on adventures with her daughters; from the set of a photoshoot to her kitchen; from tears to joy. A component piece of her realness is her openness around her anxiety.

It's a real epidemic in our country, I think more people than not feel this thing, it's very human.

"When I became a mom the first time with Birdie, I suffered pretty intense postpartum anxiety, and didn't know what was going on," she recalls. At first, as in her teens, she says she didn't realize that what was going on in her head was "a thing." She consciously shares what she had learned about the condition, having gotten help.

"It's a real epidemic in our country, I think more people than not feel this thing. It's very human," Philipps says.

Sharing her life on Instagram is part of how she processes these experiences, and a piece of how she has turned motherhood, in all its messy, Pinterest-fail glory, into a story; or, as the New Yorker's Marisa Meltzer put it, turned her life into a sitcom. For her artless social media presence, Philipps is aware of the constructs she is using: Sheila Heti's much talked-about novel Motherhood is in her purse on the day we talk; the narrative around her postpartum anxiety will be fully explored in Philipps' upcoming book, This Should Only Hurt A Little; she tells me that "from a purely feminist perspective, I always look at a space and think, well, why aren't there more women in that space?"

In that sense, though it's easy to criticize celebrities, and mothers, and celebrity mothers who have successfully monetized social media — today's interview takes place on a sofa surrounded by bouquets of Tropicana Kids' organic juice pouches, made with water and real juice and "no artificial sweeteners or colors," Philipps tells me, as well as packaged in a clear pouch so you can see what's inside (well, they're delicious) — I'm wary of writing off portrayals of motherhood by mothers, sorting them into "real" or "aspirational," as though posts lacking verisimilitude have no worth or purpose.

In fact, they have an abundance of meta value; they speak to portrayals of motherhood we reward, in dollar terms (most especially pictures of mothers in art-directed kitchens), with the global influencer economy predicted to hit $1.06 billion this year, per Statista, even as 21 percent of children in the U.S. live in poverty, per the National Center for Child Poverty. We reward pictures of the shiny mom-life, but not of the true struggles mothers endure.

Philipps' feed straddles both; it's paid and unpaid. The debates over whether to sleep-train or not, or whether someone else's $200 clogs are triggering, are noise. This is where her "realness" becomes a little bit radical. It's easy to hate on the basic Instagram mom, and harder to admit that for its drawbacks, it's what moms have to help them deal, and maybe score some income.

I had a really tough time when Birdie was born and felt incredible isolated and alone.

"I know people feel oppressed by the things they see on social media," Philipps says, "but that hasn't been my experience. It's been more of an opportunity for, especially, moms to feel less alone."

And she includes herself as someone who can benefit from that camaraderie. "I had a really tough time when Birdie was born and felt incredible isolated and alone, and I think if social media had existed then in the way it does now, I could have found a community that I could have felt supported [in] by women."

Used as a sounding board for one million families, social media has provided Philipps with a wealth of audience research for her upcoming TV show, which is still in development. She says she wants it to be a "bit of a break" for the audience. "I'm going to make this show for me, for me and my friends, and hopefully a lot of people will feel the same way."

I think back to her waving her neon fingertips (she refuses to try rock-climbing, over Birdie's requests, because it will ruin her nails) over the lunch spread, while clutching a Tropicana Kids juice pack.

"The thing is transparency, right?" She tells me.