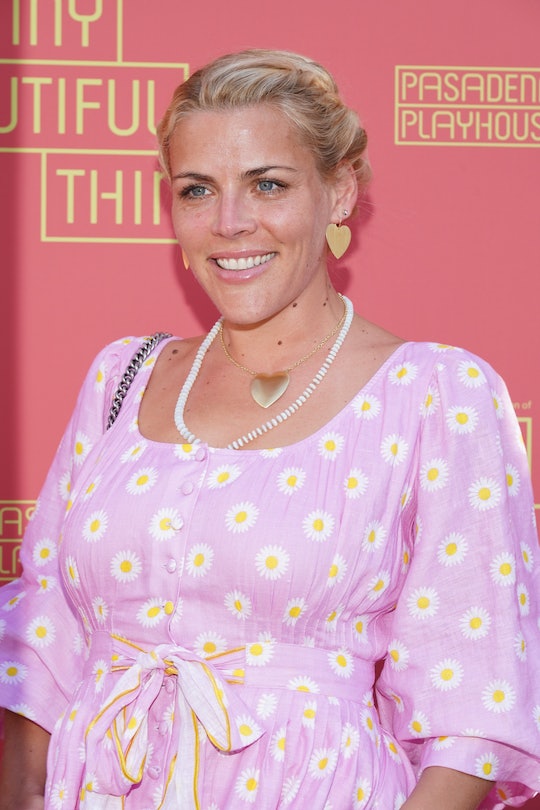 There are a lot of weird things that happen when you get pregnant. Your feet grow, your hair behaves differently, and your ribs expand, apparently. In fact, last week Busy Philipps penned a PSA about her ribs expanding after pregnancy and TBH, it's very eye-opening to think about, but also makes sense.

The Busy Tonight host shared this vital information on Instagram, as People reported, posting side-by-side photos of herself wearing her wedding dress more than a decade apart — once in 2019 and on her wedding day in 2007.

Philipps said on Instagram that the dress "basically fit," aside from the fact that her "stupid upper rib cage" expanded after two pregnancies. "No one tells you about that s***," she captioned the photo. "But babies expand your rib cage so, just be aware. This is a PSA."

Philipps elaborated more on her Instagram Story, according to Brides. "Twelve years after my wedding, it still fits, actually we had to take the belt in, we had to make it smaller, but it doesn't zip the last two inches up my back, because, you know, rib cage grows after you have babies," Philipps said on her IG Story last week, according to Brides. "So, I don't know if you guys know that, but this is [a] true story."

Fitness expert and Every Mother founder Leah Keller confirmed that your rib cage does indeed change when you get pregnant, but not exactly how Philipps explained. It's your lower rib cage, rather than the upper portion, that expands during pregnancy. Keller said this happens "to make room for baby" and added that sometimes the ribs return to their original position, but not always. There are ways to encourage your ribs to return to their original position, according to Keller, but it's not guaranteed to work.

"Both deep core exercises that properly engage the transverse abdominis can help coax the rib cage to resume its original circumference," Keller said. "These measures are particularly helpful during the early postpartum months or while still breastfeeding. Other than an occasional wardrobe item that might not fit exactly the same, this is nothing to be concerned about."

Rib expansion is pretty common during pregnancy, HealthLine explains, and some women may experience pain, according to Medical News Today. Dr. Randi Jaffe, a prenatal chiropractor told Aaptiv, "there can be inflammation in both the front and side areas of the rib cage as well as the middle back area where the ribs attach to the spine. This is all a recipe for dysfunction and ultimately pain to the area... Although our bodies are built for this, we are often maxed out."

The former Cougar Town star has been open about how pregnancy changed her body and her life. In an interview with Parents, for instance, Philipps admitted that her marriage suffered after she welcomed daughter Birdie in 2008, saying that her husband Mark Silverstein "was not understanding how to be a dad and, in fact, didn't try." Luckily, things changed when her second daughter Cricket was born in 2013. "Marriage is always hard, but especially when you have kids... You're going to go through periods when you're not into it, but there always has to be one person willing to fight," Philipps told Parents.

Fans have come to appreciate how candid Philipps is about having kids and motherhood. Even when she shares something shocking, like the news of this rib expansion, moms everywhere are like, "Same!" Her comments are often flooded with fans who can totally relate to what she's going through, and it's rare to connect with a celebrity on that level. Keep the realness coming, Busy!

More Like This
Barre Could Be The Low-Impact Prenatal Workout You Need
Can You Bowl While Pregnant? Experts Weigh In
Tom Hiddleston & Zawe Ashton Are Expecting Their First Child Together
Lauren Conrad Shares Experience With "Lifesaving Reproductive Care" After Ectopic Pregnancy