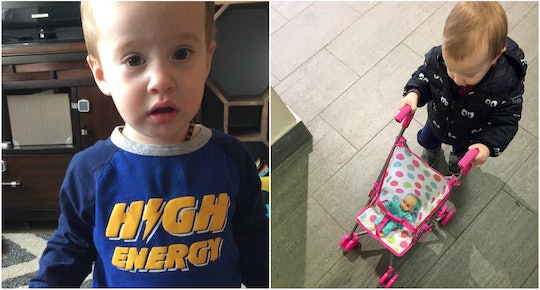 “Boyz like to play rough. They climb in trees and play in the dirt. Boyz love finding trouble!” This is an actual quote written on a tag attached to one of my 18-month-old’s shirts. The funny thing is, the shirt is a really dapper little button-down and looks like something he would maybe wear to church — it’s not really a rolling-in-the-mud kind of shirt. Regardless of what the shirt itself looks like, this tag makes my skin crawl. Children start to get messages about gender norms from birth. From the toys we buy them, to the clothes we dress them in, they start to get a sense of what they are “supposed” to do as a boy or girl from the moment they are born. That's why I think it's not enough to be "neutral" about your choices: I think you need to buy your son some girls' toys.

A BBC experiment dressed a female toddler in boyish clothes and a male toddler in girly clothes, and filmed volunteers interacting with them. The strangers gave the babies toys based on their perceived gender. The baby perceived to be a girl was given a doll while the "boy" was given toys related to spatial intelligence like a shape sorter, and wrangled onto the ride-on toys by a volunteer.

I come across this issue all the time when buying toys for my son. I was looking for a toy vacuum once and — rather unlike the range on offer at P.C. Richardson — the overwhelming majority were pink. When I shop for clothes, all of the t-shirts available for boys say things like “mischief maker,” “high energy,” and “mess maker” (I cannot pretend to be innocent here, those are all shirts I have bought myself). But when I take a step back, it’s easy to see that by and large girls are encouraged to nurture and be fancy, and boys are encouraged to be wild, mischievous and get their hands dirty.

On a recent trip to Target, my son came across a pink baby-doll stroller and almost flung his body out of the shopping cart trying to reach for it.

These stereotypes have implications that run much deeper than the toy aisle at Target. What happens to the little boy that doesn’t like to dig in the dirt and play rough but, rather, wants to play with dolls and carry a purse? What about the little girl who wants to play with trucks? By creating toys and clothing marketed toward gender stereotypes, we are sending children the message that anything that does not fit inside these two categories is wrong.

Is it wrong to encourage a boy to be nurturing and gentle?

On a recent trip to Target, my son came across a pink baby-doll stroller and almost flung his body out of the shopping cart trying to reach for it. He wanted to push around that stroller so badly. I bought it for him and when we got home, we put his doll inside and took it for a walk. As silly as it sounds, I know that some people would take issue with me letting my son play with a pink doll stroller, or with dolls in general. Adults love to project our own insecurities and biases onto our children — we do this all the time whether or not we are even aware of it. Is it wrong to encourage a boy to be nurturing and gentle? Wouldn’t I want my son to grow up to be a loving and warm father?

The way I see it, so many of the issues we are facing today can be traced back to the way we encourage boys to be rough and at the same time teach girls to be meek people-pleasers. In light of the #MeToo movement and the way gender stereotypes are portrayed everywhere from our toy stores to our media, and even in our White House, we need to be even more mindful about how we are raising our sons. And it starts before they are even born, with "guns or glitter" sex reveal cakes and the like.

So yes, I bought my son a pink stroller and some mermaid bibs that he was pointing to (he calls mermaids MEEMEES, it's adorable) and I am not saying that this is the answer to the world’s problems — but if we encourage every child to play with all the toys, and not just the ones we think they’re supposed to play with, I think it's a step in the right direction.