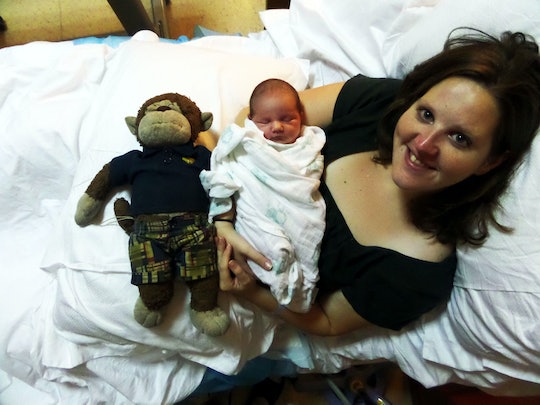 A Mom Treated With The Postpartum Depression “Wonder Drug” Looks Back

Stephanie Hathaway was 29 and living in China with her husband when she gave birth to her first child — a delivery that was unremarkable beyond epidurals being unavailable outside business hours. In the following weeks, she had difficulty bonding with the baby and experienced intrusive thoughts. Sitting alone with her baby one day, she thought, “Oh, my goodness. I am petrified of what I might do to myself if I put this baby down," as she recounts to Romper by phone. Her husband called a American doctor who diagnosed postpartum depression and put Hathaway on antidepressants.

It took three months for the medication to work, and six months to get the dosage right, but Hathaway recovered. She was 31 and living back the U.S. when she had her second child. Three weeks after delivering, she began to experience the same intrusive thoughts, and contacted her doctor, who referred her to a specialist. “Unfortunately, the treatment plan that they put me on really caused me to spiral, and it made it worse,” she recalls. “The antidepressants did not help at all. They didn't even make a drop in the bucket to help. I was petrified. My husband was petrified. I wasn't bonding with my children. It was a horrible time.”

A friend told Hathaway about a clinical trial taking place for a new drug to treat postpartum depression specifically. Two years ago, she began hospital treatment at five and a half months postpartum, receiving 60 hours of intravenous brexanolone, now approved by the FDA as Zulresso. The effect was profound.

“Between hours 12 and 18, I started to notice a huge difference,” says Hathaway. “I woke up from a nap, and the intrusive thoughts were just gone, and they didn't come back ever. I picked up a phone and I called two different friends that I hadn't talked to for six months.” She called her husband, babbling excitedly about getting home to her kids. "He just said, 'Stephanie, I have not heard the you in your voice in so long.'"

We know it’s much worse for the baby developmentally if the mother is not treated.

Brexanolone represents a shift in the care model for the broader umbrella of acute perinatal mood and anxiety disorders (PMADs), of which postpartum depression (PPD) is one such condition. According to CDC data, PPD affects around one in nine new mothers, but ongoing research into acute PMADs suggests the prevalence and seriousness could be worse. An observational study of Californian population published in the American Journal of Obstetrics & Gynecology in June found that drug overdose and suicide together accounted for 18% of maternal deaths in the year following birth, and were often omitted from maternal mortality counts.

Those with acute symptoms have found their treatment options limited in the past where antidepressants are considered a risk for breastfeeding infants (certain antidepressants have been deemed OK to take, especially taking into account the balance of benefits of breastfeeding), or where primary caregivers were not educated about PMADs.

“Now we know it’s much worse for the baby developmentally if the mother is not treated,” explains Dr. Jennifer Rhodes, a reproductive psychiatrist who practices at the Postpartum Wellness Center in Boulder, Colo. Rhodes says that PPD is likely still under-diagnosed, under-screened, and under-reported by parents who perceive a stigma around mental illness, even as researchers hone in on biological underpinnings.

Brexanolone, aka "Zulresso," is designed to work on GABA-A receptors, following research that linked low allopregnanolone concentrations during pregnancy to postpartum depressive symptoms (though they were not the only predictor). Allopregnanolone is one of the breakdown products of progesterone, explains Dr. Samantha Meltzer-Brody, who has a master's in public health and is the Ray M Hayworth Distinguished Professorship of Mood and Anxiety Disorders and director of the Perinatal Psychiatry Program, UNC Center for Women’s Mood Disorders, as well as the primary investigator of the Zulresso clinical trials, who corresponded with Romper by email.

By targeting certain receptors, the drug acts on the central nervous system, rapidly impacting mood. It is administered via IV in a hospital, and treatment takes around 72 hours. In most cases, this means 72 hours away from baby.

Two double-blind, placebo-controlled trials of the drug on around 246 women inside 6 months postpartum found significant reductions in HAM-D scores (a 17-part questionnaire administered by a physician to measure depression), per the paper published by Meltzer-Brody and her peers earlier this year. The placebo group also saw improvements. The study’s authors stated the medication's efficacy for “moderate to severe” cases of postpartum depression. The person who is severely depressed "may have suicidal ideation and not be able to perform usual activities," explains Meltzer-Brody.

In other words, in-patient brexanolone treatment is not a measure physicians take lightly.

“It was very hard. There was a lot of guilt associated with it,” says Hathaway of admitting herself to the hospital, separate from her children. “From the time you think about having babies or know people having babies as a teenager, [it's] ‘Oh, once you have the baby, the pain goes away. They lay them on your chest, and there's instant love.’”

Inability to function is a guiding factor in diagnosing PMADs and determining the course of treatment, which is generally multifaceted: “For the most part it's really the outpatient treatment in terms of the support, getting sleep, helping with getting them the proper type of therapy, a moms' group if they're amenable to it, and medication,” says Rhodes.

A July Lancet Psychiatry editorial likewise made a case for a collaborative care model involving “access to a night nurse after delivery, case management, temporary safe housing, family education, and a team-based approach to regular physical and behavioral health checks for both mother and baby.” Together, these elements “could all go a long way to improving outcomes,” wrote the board, “and for substantially less cost than brexanolone,” which at a cost of up to $35,000 does not come cheap (Hathaway's costs were covered by the trial; she also had private insurance through her husband).

I still would constantly hear people come to see me saying, ‘I ended up in the ER, they told me they couldn't give me anything because I was nursing.'

A review of the trial by Jennifer A. Tufts suggested the original study may have understated the impact of sleep (a key side effect of the drug) on participants, noting that psychosocial sleep interventions on their own can improve mood. That is, more sleep — however you get it — results in a lower incidence of PMAD symptoms. Meltzer-Brody has defended the study against this claim.

Further, the authors of the July Lancet editorial were skeptical about Zulresso’ as a widespread cure for PPD (“It seems unlikely that brexanolone alone... will be able to make even a slight dent in reducing the overall burden.”). Rhodes also notes that there is no data yet on remission outside the initial 30-day followup.

Still, the medication has clearly a place in the greater realm of treatment options. “If someone is either a) not functioning, b) suicidal or a danger to herself or someone else and is so acute that I at least were considering inpatient care, for me that would be an obvious consideration for Zulresso just because of the fast-acting efficacy,” Rhodes says, noting that the treatment also buys time for antidepressants to take effect. And it supplements often limited options available to women, especially outside major cities.

Rhodes previously worked at the Motherhood Center of NYC, and says even in a city lousy with reproductive psychiatrists “I still would constantly hear people come to see me saying, ‘I ended up in the E.R., they told me they couldn't give me anything because I was nursing. They sent me home.’ I mean, that's a very common story.”

We have begun to take women's perinatal health seriously, but progress in the field is hard won. "I think it's a public health issue and and civil rights issue," says Rhodes. "The health of the woman was oftentimes jeopardized because people thought that it would be better to just focus on the baby in the context of a pregnancy." Hospitalization might seem extreme, but then so is the disorder in some cases.

“If I had not had the treatment, I definitely wouldn't have had any more children,” says Hathaway, who has no symptoms two years on, and is at home in Connecticut with her two kids.

“Having kids is tough for anybody whether you go through postpartum depression or not," she says. "It's a tough season to be in.”

Editor's note: A previous version of this article incorrectly stated the number of women enrolled in the trial. It has been updated.

More Like This
What To Know About Your C-Section Shelf
Pinterest Predicts Their Top 2023 Trends In Parenting, Beauty, Fashion, Home, & More
The “Tripledemic” Is Scary, But I Feel Less Helpless When I Wear A Mask
Can You Give A Sleeping Baby A Breathing Treatment? Experts Explain