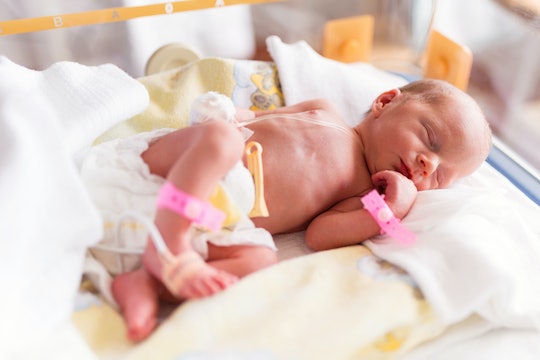 It seems like every week, there's a new study out about the health of newborns and babies. That's not a bad thing, because of course, the more we understand about infant health, the better. Recently, a study led by Western Sydney University — as well as collaborators from University Medical Center Groningen and VU Medical Center (Netherlands), Flinders University (South Australia), UCLAN University (UK), Sydney University, and the University College Cork (Ireland) — revealed some interesting findings about birth interventions. The study found that C-sections and inductions could hurt your child's health later on, but the lead researcher on the study said that doesn't mean moms who do need those interventions should feel guilty about getting them.

The team behind the study looked at data from 491,590 healthy women and their children who were born in New South Wales from 2000-2008, and followed the kids during their first 28 days of life and up to when they were 5 years old, according to CTV News. And researchers discovered that there does seem to be a notable link between medical interventions — like Caesarean section and induction — during birth, and an increased risk of long-term health problems in children.

The researchers wanted to analyze if operative interventions, like C-section, and medical interventions, such as induction or augmentation of labor, had an effect on children's health in both the short term and long term. They found that kids born via "spontaneous vaginal birth had fewer short‐ and longer‐term health problems," at least compared with those born following birth interventions, CTV reported.

Babies born by C-section reportedly had higher rates of hypothermia after birth, the study found. The results of the study, published in the journal Birth on Monday, also found that babies born via C-section are more susceptible to metabolic disorders — including diabetes and obesity — and eczema by age 5 compared to infants born through spontaneous vaginal birth, The Sydney Morning Herald reported.

But if you're a mom who's considering having a C-section, or who's already given birth that way, researchers made it clear that you shouldn't feel guilty for having your baby that way. Lead researcher Professor Hannah Dahlen, from Western Sydney University's School of Nursing and Midwifery, told The Sydney Morning Herald that the study was meant to "spark efforts to modify such outcomes for children born via interventions when necessary," and said:

We need to start looking at when women do need intervention because it is in the best interest of the babies and themselves.

Researchers on the study aren't saying it's wrong to ever have a C-section when it comes to the impact it could have on your child's health, but that the situations in which interventions may be necessary and the effects of birth intervention need to be examined further and more carefully.

Further study is clearly needed here, because some of the findings — like the fact that infants born with the aid of forceps or vacuum extractor to mothers with induced labors in the study had the highest risk of jaundice and feeding problems — are definitely concerning. Professor Dahlen noted that the findings were particularly concerning to her because "these were low-risk, healthy women," according to The Sydney Morning Herald.

Procedures like induction and C-section are often required to make sure both mom and baby live — and in fact, 1 out of 3 births is the result of a C-section delivery, WebMD reported. There's definitely no shame or blame if your child entered the world with the help of medical interventions like the kind analyzed in this study, and you're in good company.

Studies like these help researchers and doctors identify the rate and causes of later health issues like obesity or jaundice by looking at factors like vaginal birth versus C-section to better understand cause and effect, not to shame mothers. In this case, researchers theorized that physiological stress caused by birth interventions might change genes linked to an infant's immune response, Birth reported. Another theory suggested babies born by C-section might miss out on the "good bacteria" transferred during a vaginal birth that helps them develop a healthy gut microbiome. Imbalances of good bacteria in the gut can be associated with a variety of illnesses and diseases that can impact health in other ways later on, The Sydney Morning Herald reported.

But more research is definitely needed, and there's no reason for mothers to feel guilty if birth interventions are necessary to help them deliver their babies safely. If you're a mom or pregnant person who is particularly concerned about this study, or about anything involving birth interventions, the very best thing you can do is talk to your doctor about your concerns.