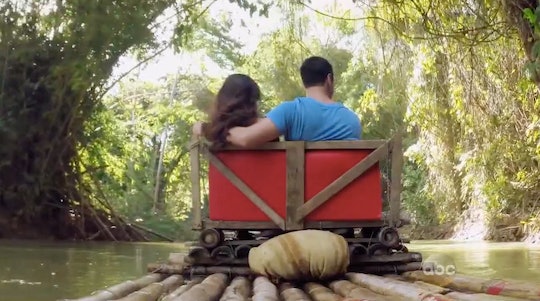 Bachelor Ben Higgins has finally made it to a two-week Jamaican vacation with his final three ladies, but his first date with Caila was anything but tropically relaxing. The pair boarded a raft in Ocho Rios, and were paddled down to a secluded jerk shack for lunch. Unfortunately, Caila and Ben's raft date ended up being completely awkward.

Ben has expressed plenty of times how he worries about whether Caila is capable of expressing negative emotions, because she's such a bubbly, smiley, "Everything's great!" type of person. Caila sort of confirmed Ben's fears too when, in a cutaway interview from the raft trip, she admitted to feeling anxious about bottling her "I love you" for the "right moment," as well as feeling "bothered" by the other two women also on vacation with Ben. But when Ben checked in to ask how she was doing and if everything was okay, she gave him a big smile back and said, "Yeah, everything's great!"

Back in her cutaway, Caila miserably struggled with how she didn't want to ruin the date by opening up about her anxieties or with having a heavy conversation — even though she was clearly already not enjoying herself by avoiding the talk. It's a rookie relationship mistake.

Caila confessed, privately, that she needed to talk about something that was ruining her experience, but that she couldn't do it because... she didn't want to ruin the experience. Instead of just opening up about her emotions and giving Ben the chance to make her feel better, she just had an extended bad time herself. And it's not like Ben didn't notice something was bothering her either — he kept checking in and, in his cutaways, he admitted to knowing something was up.

Eventually, over dinner later that night, Caila finally dropped her "I love you" (and even cried!), to Ben's obvious elation. He beamed and kissed her immediately, clearly proud of her for being vulnerable and doing something out of her comfort zone.

Their fantasy suite morning also seemed easy and comfortable, but is Caila's belatedly-found vulnerability going to be enough to keep her in the running for Ben's heart? Only time will tell.