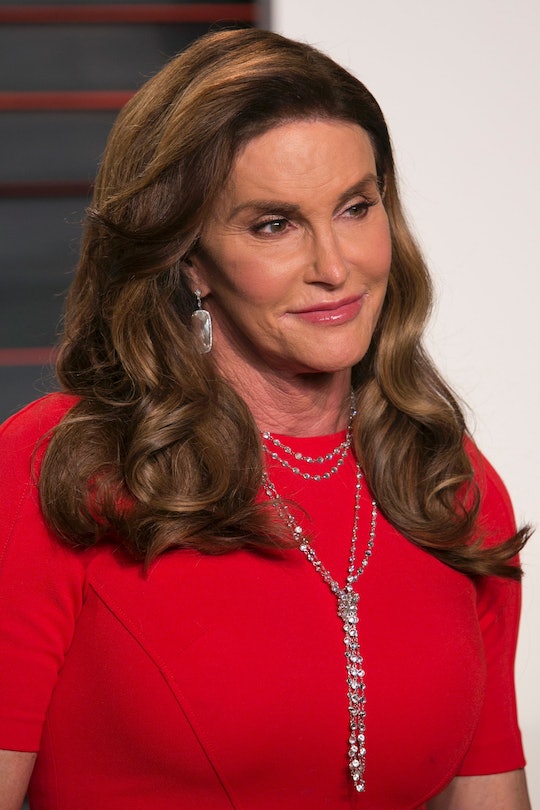 Though Caitlyn Jenner has been held up, honored, and awarded as a role model of acceptance and bravery, recent comments have put that reputation in serious jeopardy. On Sunday's episode of her reality TV show, I am Cait, Caitlyn Jenner said Donald Trump would be “good for women’s issues." That opinion is receiving deserved backlash from her friends, fans, and feminists across the country.

In the episode, Jenner is on a bus with a group of her friends when the presidential election comes up. Chandi Moore, a member of Jenner's "entourage" asks, "What do you think of Donald Trump?" Some of the friends get up to leave the room because, presumably, they know what's coming.

Jenner said, "Um, I'm not a big fan because I think of his macho attitude. I think he would have a hard time with women when he doesn't even realize it, and it doesn't mean he wouldn't be good for women's issues, I think he would be very good for women's issues." Her friends have trouble hiding their shock. "Kill me now," said friend Jenny Boylan. "Someone kill me now."

Jenner went on: "I don't think he's out there to destroy women or takes things away or do any of that kind of stuff." That prompted Kate Bornstein to ask Jenner, "Hillary Clinton or Donald Trump?" She does not hesitate to respond, "Oh my God, yes, I would never ever ever vote for Hillary. We're done, if Hillary becomes president, the country is over."

Her reasoning was "Benghazi" and "the Middle East." She said, "You can't fix immigration. You can't fix the economy. It's got to stop." She went on to call Hillary a "f*cking liar" and a "political hack." Another of her friends, visibly disgusted, intimated that Jenner had drunk "the Kool-Aid."

Why those comments are so incendiary is not because they aren't "liberal" but, rather, because Donald Trump has never made women's issues a priority and instead continues to present himself as a staunch misogynist. Jenner is entitled to her opinions, but the facts she presented about Trump are just wrong, and it's a problem that she's speaking on behalf of women about whether Trump would be good for women. Here is a brief list of recent interactions that illustrate why Trump would not, in fact, be "good for women's issues."

Trump's verbal abuse of Megyn Kelly over the course of this election season has been, to say the least, disturbing. According to CNN, during an interview Trump insinuated that Kelly's tough demeanor at a Republican debate was probably due to menstruation. As if that wasn't enough, later he retweeted someone who called Kelly a “bimbo.”

Trump only retweeted this; he didn't write it himself, but even his acknowledgement of it is incredibly offensive and goes a long way in showing how he values, views, and categorizes women. In short, they have one role.

According to The Washington Post, during a GOP debate in Nov. 2015, Trump repeatedly berated Carly Fiorina for "interrupting everybody" and later said she shouldn't be president because of "that face." If more evidence was needed to show Trump's opinion that women should be seen and not heard, this would be a good place to start.

Jenner's argument for Trump was clearly based on misinformation and rhetoric that his hardline politics are needed to "save" the country. Women have come a long way in the past 100 years. It would be prudent for Jenner, given her celebrity, to recognize that and work to preserve it. History has proven that progress can be undone surprisingly quickly.