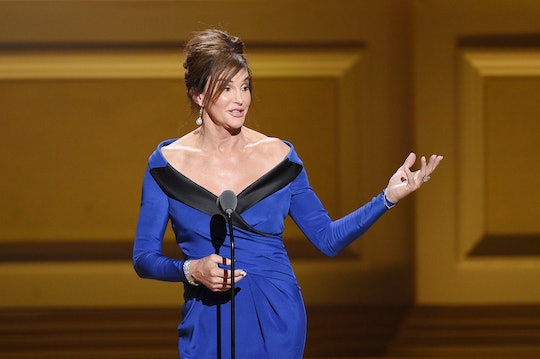 I’ve got to be honest with you: I like Ricky Gervais. He is crash, controversial, unapologetic, and while his humor often pushes the envelope, it tends to do so in a way that makes you think. But that doesn’t mean he is always on point, and that doesn’t mean he is always right. And it seems that during Sunday’s Golden Globes, he may have missed the mark — at least when it comes to Gervais's crude comments about Caitlyn Jenner and the rest of the trans community.

So where did Gervais go wrong? Truth be told, his monologue started off simple enough. Gervais poked fun at Sean Penn and NBC before listing Jenner’s accomplishments over the last year, according to video of the monologue:

[Though] she didn’t do a lot for women drivers...but you can’t have everything, can ya?

Insert the Golden Globes, awkward “did he just say that?” laughter.

Here’s the thing: While this may have been a low blow, the truth is Jenner was involved in a car accident which killed a woman, Kim Howe, earlier last year. According to the 161-page Sheriff's Department report, Jenner’s SUV slammed into Howe’s Lexus — which had been stopped in traffic. The force of the blow sent Howe and her car into oncoming traffic, and in the process, a secondary accident occurred, during which Howe was killed. While Jenner did violate the misdemeanor manslaughter law by driving at an unsafe speed, charges were not filed — as her car was not the only car involved in the accident (nor was she driving the vehicle which struck Howe). So while Gervais’s joke may have sucked, and been a bit untimely, this isn’t why everyone was pissed.

What had the trans (and cisgendered) community up in arms is what Gervais said before and after this “joke": when Gervais referred to Caitlyn as “Bruce” — thereby “deadnaming” her and publicly undercutting her identity as a woman. (Deadnaming is a term used by the transgender community for when someone refers to a trans person by the name they were assigned at birth instead of their chosen name.) While in some cases deadnaming is accidental, in others cases deadnaming is done maliciously — because the person using the “deadname” refuses to acknowledge the trans individual's new identity or because they want to draw attention to the fact that this person was once called something else. This is rude and offensive, and totally not cool.

And while this would have been enough to make the joke inappropriate, what made it worse was that Gervais immediately followed these his remark with jokes about Eddie Redmayne, who plays a transgender woman in The Danish Girl, and Jeffrey Tambor, of Transparent.

At least Jeffrey Tambor did it in a dress. Um, what a year he's had. Oh. What an actor, what a role. Every day, he has to put on all that women's clothes and the hair and makeup and let people film it. That takes balls. So, I don't know how he does it. I really don't. I've seen his balls. They are huge and long. I don't know he tucked them in the bra, that thing push them out the back and let them hang out, like a bulldog? No one knows. I love Jeffrey Tambor.

Now I don’t want to seem overly sensitive here — I mean, we should be able to laugh at ourselves; life is too damn short to be so damn serious — but what Gervais said, and did, crossed a line. Gervais played up Jenner’s identity for laughs. It wasn’t a “good joke” — with a true comedic angle and light-hearted humor — it was joke rooted in a transgender person's struggle, where stereotypes and stigmas are the punchline.

But, whether that is Gervais’s fault or society's, I cannot be sure. You see, on Tuesday, Gervais responded to some of the criticism:

And a few hours later, he added:

And Gervais’s response made me think. Because he is right, in a sense. Not every joke about a trans person is “transphobic,” and the car joke wasn’t meant to be hurtful to trans people. (Stay with me here. I beg you. Hear me out.)

You see, as important as it is to call Gervais out on his BS, I also think people should consider the inverse. Maybe, just maybe, Gervais didn’t realize how offensive or hurtful it would be to refer to Caitlyn as “Bruce.” Look at his tweets. In them he cited two things: Caitlyn Jenner and her car crash. He doesn’t call her a him, and doesn’t seem to know why everyone is so damn mad. Even in two follow-up tweets he maintained the joke was about Caitlyn’s driving, not her identity:

My point is even Gervais seems to “not get it.” (And for a comedian who has made a career out of being controversial, I’m pretty sure he would own up to it if he did.) The language surrounding the trans community is new. Cisgendered individuals, like myself, do not always know what to say, or how to say it, and we mess up. I've unintentionally messed up (and based on these tweets, I think Gervais’s “joke” about “Bruce’s” big year — was more of a misunderstanding than willful ignorance and hate speak). Does that make it right or OK? No, absolutely not. But instead of attacking the comedian, and one other, perhaps this can become a learning moment. A teachable moment.

So while Caitlyn Jenner doesn't think Ricky Gervais should host the Globes anymore (and perhaps she is right), I think all of us should all remember this: Making jokes about a population that experiences as much violence and discrimination as the trans community does isn't good or admirable comedy. Making jokes meant to offend anyone isn’t right. And making jokes which can be seen as hurtful — which are rooted in stereotypes and stigmas — is wrong. So very wrong. Laughter is important, but not at the expense of one another.