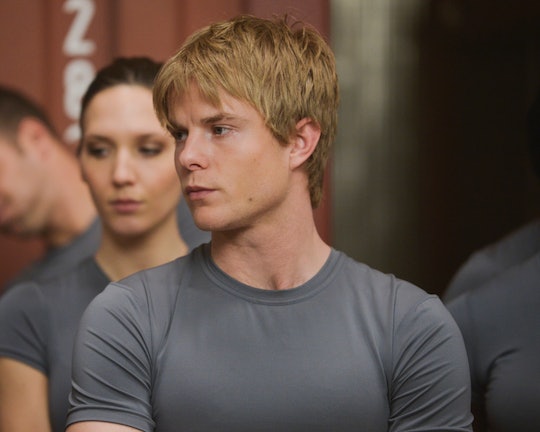 Sunday's episode of Quantico was anything but light, then again, is this show ever? In the midst of a terrorist attack — which threatened the lives of all of those at the training agency — the present day of the show revealed that Caleb is missing on Quantico, and no one seems to know where he is. Could this be the workings of his cult-alter ego (Mark Raymond), or can his disappearance be explained as a man mourning his father's death?

During one of Alex's sneaky missions commissioned by the terrorist she has involuntarily been working for, we learn that Caleb has been MIA since the second bomb went off at the command center/bank. Caleb's mom, Claire Haas, is lured into a room by Alex on the condition that she'll learn where Caleb has gone. It's interesting that this is the first time we've heard anything about Caleb's lack of presence in the present time. Where has he gone, and why isn't anyone more concerned about his whereabouts?

According to his mom, Caleb has been missing for months after the bombing. There are a few approaches to explaining his absence. First, it could be that Caleb is mourning the loss of his father, who died in the command center bombing. We know that they had a weird relationship, but it was his dad — clearly there are many reasons he may want to take some time off before jumping back into work and standing next to his mother for her presidential campaign.

But, the other option is far more scandalous — and much more Quantico-esque. Since the beginning of time — OK, since the beginning of the season — we have been teased by Caleb's alter ego, Mark Raymond. Mark is the name and persona Caleb uses when working with the cult. We still don't know if Caleb is choosing to work with the cult — we know he's had the tendency to be impressionable to such organizations in the past — or if this is some FBI secret mission that he has planned. We just know that he's up to something.

We have to remember that Caleb was seen at the bank, months before the bombing took place, under the Mark Raymond alias. It certainly seems, to the red herring-eye, that we are supposed to believe that Caleb was scoping out the potential site for a bomb. But, it's hard to believe that the Caleb we see at Quantico is the Caleb that could plant a bomb and kill hundreds of people.

Sure, he's had his trouble past, but Caleb seems to be in a good headspace — not only in Quantico, but also in the present day. He seems to have done well for himself in the FBI, proving his father wrong. Then again, there's always the possibility that Caleb is under the spell of the cult, again, and acting erratically. This is one of those mysteries we'll have to wait to figure out, but as for now, the absence of Caleb is officially marked "suspicious."