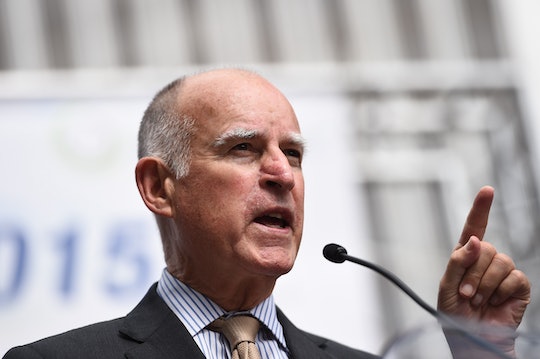 California Did Not Legalize Child Prostitution

A new California law decriminalizing child prostitution for victims of sex trafficking has sent conservatives into a tizzy because of a fundamental misunderstanding of the law's intent. Misinformed folks are being helped along by right-wing blogs and other media outlets decrying the move as part of some super progressive left-wing attempt to encourage children to have sex for money, which simply isn't supported by any reading of the law or it's intent. No, California did not legalize child prostitution, and here's what really happened.

Senate Bill 1322 was written by California State Sen. Holly Mitchell and signed into law by Gov. Jerry Brown, and, according to the Los Angeles Times, the legislation decriminalizes child prostitution to keep kids, who are victims of sex traffickers, from being re-victimized again by the criminal justice system and being treated like criminals. As Mitchell noted in a tweet on the issue, "There is no such thing as a child prostitute!" the LA Times reported. Instead of taking child prostitutes into custody for misdemeanors like loitering, the bill intends to only take kids into police custody to protect them and get them the social services they need.

Decriminalizing prostitution for children being abused and victimized isn't the same as making sex with children legal, but it appears no one told the hardcore right-wing blogosphere, and even more mainstream publications, some of which reported the new law will only serve to make "pimps" more money, and quoted a California prosecutor who reportedly said the new law reads like it was written by sex traffickers themselves to boost their business.

Another right-wing blog described the new law as making "it legal to pimp out your children to sexual predators," which again, is completely false. It's still illegal for adults to engage in trafficking and child prostitution in California. The law simply protects innocent children from being convicted of misdemeanor prostitution crimes that they were forced by traffickers to commit.

The misrepresentation of the new law as somehow "pro child prostitution" is so absurd, it caught the attention of fact-checking site Snopes, which traced the spread of false information about the bill to a blog post from Sept. 28, 2016 that read, in part:

This is absolutely astounding. The liberal numbnuts who run the State of California just decriminalized child prostitution. There is no misinterpretation of what they’ve done here. It is no longer illegal for anyone under the age of 18 to engage in prostitution or to solicit money for sex. Like I said, kids in California are now able to legally work as prostitutes.

Snopes added that the new law, which goes into effect January 2017, is in line with the U.S. Department of Justice's stance that criminalizing abused children trapped by sex traffickers denies them the help and support services they need to recover from their abuse. So, please, before you share, check the facts.