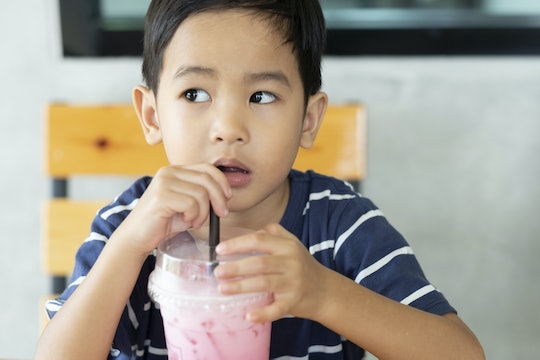 Over the past three decades, the number of children considered obese for their age has skyrocketed. And, according to research, one major factor driving these rising rates is the amount of soda and other sugary beverages kids consume. So, in an effort to combat childhood obesity, lawmakers in California have decided to address the problem head-on, and soon, California may limit kids' intake of sugary drinks at restaurants, becoming the first state to do so.

A new bill, Senate Bill 1972, introduced by California lawmakers would prohibit restaurants from offering soda and other beverages loaded with sugar on the kid's menu, according to CBS News. Instead, under SB 1972, food establishments would only be allowed to serve young dinners unflavored milk or water to go along with their meal, CBS News reported. These limitations, lawmakers claim, would help reduce childhood obesity rates, which Harvard University researchers have linked to increased consumption of sugary drinks.

The proposed legislation passed the state Assembly last week and is making its way to Gov. Jerry Brown's desk, according to The Hill. If Brown were to sign SB 1972, California would become the first state to have a law on the books that regulates kids' drinks in restaurants.

Estimates from the U.S. Centers for Disease Control and Prevention show that nearly 19 percent of children ages 2 to 19 are considered obese, with the highest rates among 12- to 19-year-olds. And kids who are considered obese face elevated risks of high blood pressure, breathing problems, joint problems, and diabetes, among other health issues, according to the CDC.

Stephanie Winn, director of media advocacy at the American Cancer Society who supports the legislation, told KOVR, a CBS affiliate:

Some of these kids are drinking up to three sodas a day. This is setting them up for tremendous cancer risks down the road. Because now we know that 20 percent of all cancers are tied to being overweight.

It should be noted, though, that Winn's language is a bit misleading. A 2013 study published in The Journal of Obesity did find that 20 percent of cancer cases — but not the types of cancers in and of themselves — had been caused by obesity. Additionally, the study found that the risk of malignancies increased depending on diet, weight change, body fat distribution, and physical activity.

Nevertheless, data published by the CDC last year found a link between obesity and 13 types of cancer, including colorectal cancer. Those cancers accounted for 40 percent of all cancers diagnoses in 2014, according to the CDC.

Although California would be the first state to remove sugary drinks from kids' menus, it would not the first time that lawmakers have championed such a move. Back in July, Baltimore became the first large city in the United States to ban food joints from offering kids soda and other sugar-loaded beverages, according to NBC News. (Smaller municipalities in California implemented similar measures.) Instead, children in Baltimore would be offered milk, water, and 100 percent fruit juices until the local ordinance, NBC News reported.

Of course, these bans have been heavily criticized by the public and on social media, with questions raised about where the line between personal freedom and public health concern is drawn. Parent Inez Deocio told CBS News:

I think the government shouldn't determine what's available when I as a mother know what's best with my child.

To that end, the legislation in California wouldn't prohibit parents from ordering soda over the adult menu, and make the choice whether or not to let their kid drink some, according to KOVR. Baltimore's ordinance allows for the same exception.

Although the knee-jerk reaction to dismiss this legislation as paternalistic is understandable, it's misguided. A middle ground is provided — the law doesn't stop parents from requesting soda, even if it's not offered on the kids' menu. You, as a parent, still get to make the choice whether or not you want your kid to have a sugary drink. The only difference is, California isn't going to market that option to kids in restaurants.