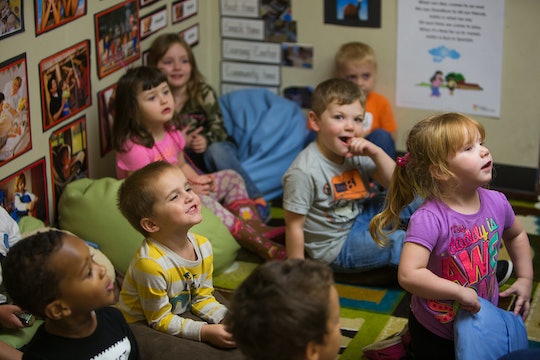 On Wednesday, the California Right Start Commission released a new report advocating for universal childcare and preschool across the Golden State. Titled "Rebuilding the California Dream," California's proposed preschool model comes with a hefty price tag: Craig Cheslog, vice president of California policy for Common Sense Media, told The Los Angeles Times the recommendations outlined in the group's report would cost California between $8 billion and $9 billion more than it spends now on early childhood education. But the benefits to the state's children would be immense.

The 53-page report from the Right Start Commission outlines four key recommendations for California — but other states should be paying attention, too. These recommendations include universal early learning and childcare programs for children from birth to age 5, to investments in preventative health care, public awareness for the importance of early childhood education, and a "more responsive business community." The most ambitious initiatives call for universal access to transitional kindergarten for all 4-year-olds and that all children ages 0 to 3 "have access to safe, developmentally appropriate care" by 2021. It's just that $8 billion price tag that's the biggest obstacle for the commission to overcome — but they make a compelling case for California's children.

Besides the legislative funding hurdle for these recommendations, the commission faces financial hurdles felt by the parents of young children as well. Nationwide, lower-income households are less likely to send their children to preschool — and California is no different. According to their report, about half of California's children are from families in or near poverty levels. Thus, the report advocates for a sliding scale for childcare and preschool fees based on financial need, with "full subsidies for the lowest-income families."

While the recommendations within the Right Start Commission's proposal will cost a significant amount of money to implement, the commission argues the costs are worth it, citing a 2010 study from The Journal of Public Economics in its report and noting that "for every dollar invested in high quality early childhood education, society saves $7." Additionally, California Rep. George Miller told KQED's Forum on Wednesday morning that "The cost is in doing nothing. Failure in early childhood greatly increases risk factors for the rest of a child's life."

California's proposed preschool model may be overly ambitious and sweeping in its recommendations for childcare and early education — and it's going to require a comprehensive cost-benefit analysis by policymakers. However, that cost-benefit analysis shouldn't just be limited to whether or not the state of California can afford it; rather, policymakers need to decide if California's young children are worth the investment.

As President Obama said in a 2013 speech on early education:

Let’s make sure none of our kids start out the race of life already a step behind. Let’s make it a national priority to give every child access to a high-quality early education. Let’s give our kids that chance.

I think it's safe to say that yes, universal childcare and preschool are worth it for California's children. It's worth it for all of our children.