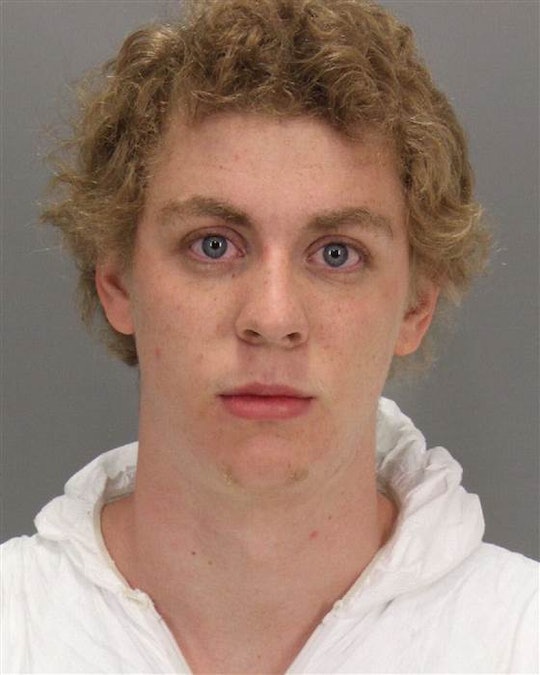 In March, a jury convicted Turner of three counts of sexual assault for raping an unconscious woman behind a dumpster. The woman, who has not been named, has no recollection of the incident and woke up the next day in a hospital room. She recounted her experience in this harrowing letter that she read in court. Turner mounted a vigorous defense, claiming there was consent.

Turner's attorney Mike Armstrong did not comment on the outcome of the case, but he did tell Romper that the focus on Turner's swimming career is "the power of your brothers and sisters in the press":

You print what you want to print. I didn't really talk to the press while the case was in court and neither did Brock and his family.

Still, he was convicted. But, adding unbelievable insult to his victim's injury, Turner was sentenced to just six months in jail, a punishment the San Jose Mercury News called in an editorial a "slap on the wrist" and a "setback for the movement to take campus rape seriously."

But that's the country we live in, one that seems to be fighting against every effort to insist that rape be taken seriously and treated like the violent crime that it is, rather than trying to dismiss these crimes as something less sinister, less despicable.

Turner's victim has been a warrior in this fight — taking her rapist to court, enduring months of being re-victimized all over again by reliving the attack and trying to convince a jury of her assailant's guilt. She wrote a powerful letter to her attacker that's so moving, it should be required reading for anyone who wants to understand what "rape culture" really means and why our society and criminal justice system are more inclined to protect a rapist than the victim. In the letter, she explains that she fought for justice, not just for herself, but for all of the women who couldn't fight for themselves. She was standing up for all those who couldn't endure months of character assassination and accusations that she was too drunk or promiscuous to deserve justice.

Turner's father argued in a letter to the court that his son had already been punished enough for what he referred to as "20 minutes of action" because he no longer enjoys eating steaks. It takes a village to dismiss a rapist's crimes, apparently.

But in all the coverage of the case, one thing remains consistent: the return to that identifier for Tuner, All-American swimmer. As if how fast he can swim somehow mitigates his crime or the damage done. Let's be clear: it doesn't. The term All-American is a designation that anyone should be proud of — that they were able to compete at the highest levels of amateur competition in the country. But that's no longer the most important thing about Turner. It's what an editor might call, "burying the lede," or burying the most important details at the end of a news story.

We don't do that for other criminals. We don't refer to Charles Manson as "recording artist." We don't say Jeffrey Dahmer was charming because he was a sociopath. And there's a reason why. Because the crimes they committed, and the damage they inflicted, overshadow anything else about their lives in the public mind. But somehow an affluent Stanford athlete gets to keep his top resume item in front of his name, reinforcing the idea that being a rapist isn't enough to overshadow his ability to do flip turns in a pool. Even more distressing is that it dismisses the damage he's done to his victim and everyone she loves.

So let's stop focusing on the All-American swimmer aspect of Turner's life. Let's instead turn toward his victim and his crime. Because fast swimming doesn't really matter anymore. What matters is that his victim gets justice. And that includes calling her attacker exactly what he is: a convicted rapist.