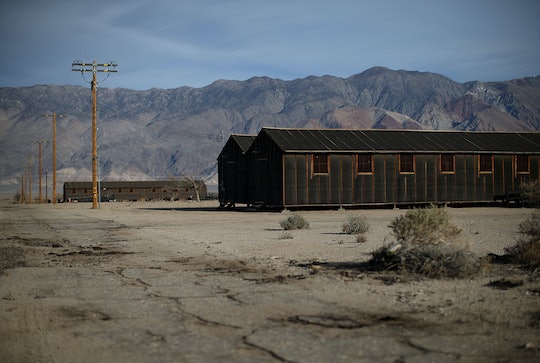 In the wake of the Manchester bombing and the attack on the London Bridge last month, there are renewed calls for internment camps for Muslims, both in Britain and among Trump supporters in the United States. In a recent interview on Fox and Friends, Nigel Farage, a British politician and former UKIP leader who appeared on the campaign trail with Donald Trump and was a longtime supporter of Brexit, said that if more action wasn't taken by governments, calls for internment would only grow. And he's not the only one who's made headlines for his risky comments either.

In the Fox and Friends interview, Farage said:

We want genuine action. And if there is not action, then the calls for internment will grow. We have over 3,000 people on a sort of known terrorist list, and we're watching and monitoring their activities, but a further 20,000 people who are persons of interest, mainly they're linked in some way to extremist organizations.

He then walked back his statement saying that he understands that internment might not be the best course of action, since it would only further radicalize "good" Muslims. A Fox and Friends host also made it clear that the Fox network was in no way endorsing internment, akin to that of Japanese Americans during World War II, and that the network found the idea "reprehensible."

Still, it allowed for the idea to be floated on national news. Another guest on the show, Katie Hopkins, wasn't buying Farage's "moderate" take on internment.

"We do need internment camps," she said. "Before, I would've bought the idea that, no, this gets more people radicalized. You know, that's not the solution. But we've gone beyond the tipping point." Hopkins later apologized for her comments on-air.

Earlier this week, radio host and Trump friend Michael Savage made similar comments on his show, saying that the president should look into "World War II-style" internment camps for Muslims.

Cue the record skip, stop the beat. What are these people talking about? World War II-style internment camps?

The Japanese internment camps during World War II have long been considered a a very dark time in American history — it was a racist, fearful reaction to the Japanese attack on Pearl Harbor. In fact, in 1988 President Reagan signed legislation officially apologizing for the act and compensating Japanese American victims of the camps.

There's a little saying that people who don't know or understand history are bound to repeat the same mistakes, to theirs or the country's detriment. Rounding people up and incarcerating them in camps is not the way to stop domestic terrorism. Not only that, even suggesting internment betrays a misunderstanding of how terrorist attacks like the ones in Manchester, London, or Orlando happen.

To prevent terrorist attacks, politicians should trust the American vetting system for immigrants. Instead, a call for a review of the system that allows terrorists to buy weapons at gun shows, acknowledging finally that not all terrorists are Muslims, and having politicians disavow incendiary, racist comments from their supporters would be a more prudent place to start. And none of those ideas infringe on any one's civil or human rights.

Renewed calls for internment camps only serve to spread fear and distrust of each other. It was wise of Fox News to apologize for any fear its panelists may have incited, but maybe instead of having guests on calling for needless "extreme vetting" or worse of Muslims, the network should implement a stricter vetting of its guests and hosts before they appear on morning shows calling for internment. What would be even better is if the administration itself, especially the president, disavowed supporters that call for violence towards or internment of Muslim Americans altogether.