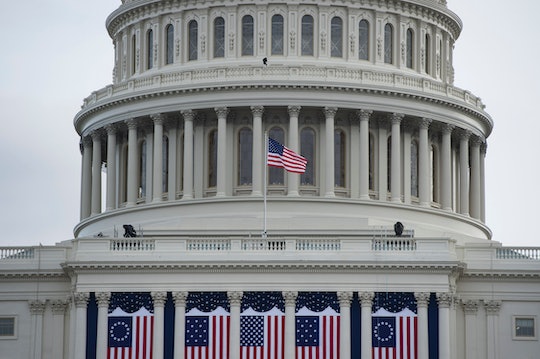 No, The Women's March Doesn't Need A New Name

It was inevitable that, as the Women's March approached, it would inspire all sorts of criticism. And now that the event is just hours away, it's really heating up. Some of the March's opponents have gathered around the Twitter hashtag #RenameTheMillionWomenMarch to swap sexist jokes and generally make fun of the women who plan to attend. But while calls to rename the Women's March totally miss the point, it's the conflict and criticism coming from within the feminist movement itself over the Women's March that's worthwhile.

You wouldn't think thousands of women protesting for basic rights like access to healthcare and against a president-elect who has been recorded joking about grabbing women by the genitals without their consent would be much of a surprise. You'd think that women objecting to the way their new president has talked to, and about, women was predictable. But apparently there are still many Americans who just don't get why so many ladies and men who oppose Trump's rhetoric just refuse to warm up to the idea of President Trump. There are still more who simply misunderstand the basic underlying concepts of intersectional feminism that have fueled the massive response to the March.

Nonetheless sexists are tweeting with glee under the inaccurate hashtag with little gems like this:

And while these tweets don't require a response, they are informative about how important it still is to fight against this kind of misogyny and sexism in 2017. Because people apparently still feel super comfortable spewing this kind of hateful anti-woman garbage.

I think this tweet from Sara Schaefer sums it up nicely.

The March and its organizers have faced the ludicrous complaint that the March excluded men, with some even going so far as to call it "unmasculine," according to the New Yorker. God forbid! As if there's no greater shame in America than lacking masculinity. Please. It would be funny if it was a joke.

The more men that try to shame a group of women for expressing their concerns about their government, they more they prove why the Women's March is necessary. But don't get it twisted: just because it's a "Women's March" doesn't mean men don't have plenty of reason to join.

As the March's own mission statement explains, everyone who is concerned about human rights should join in the protest.

We support the advocacy and resistance movements that reflect our multiple and intersecting identities. We call on all defenders of human rights to join us. This march is the first step towards unifying our communities, grounded in new relationships, to create change from the grassroots level up. We will not rest until women have parity and equity at all levels of leadership in society. We work peacefully while recognizing there is no true peace without justice and equity for all.

Issues like equal pay and access to child and health care directly impact millions of American households. Women's access to family planning matters to millions of families (ones that, I would guess, probably include men). When one American's civil rights are taken away, no one is safe. And this atmosphere of hyper-masculinity driven in large part by Trump's rhetoric concerning women isn't productive, it's damaging to so many aspects of our American life. It's damaging to our daughters and our sons; to our communities, to our general sense of civility and decency. If all of that isn't worth marching for, I don't know what is.

But regardless of how offended the sexist snowflakes are about it, the Women's March is undeniably a feminist protest against Trump, his misogyny, and his demonstrated lack of respect for the women he represents in our nation's highest office. So anyone who isn't cool with that probably should just stay home and hate-Tweet instead. Sad!