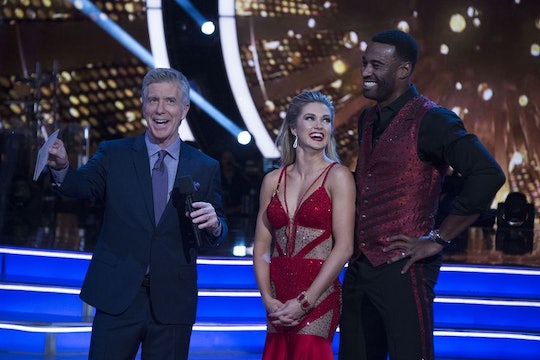 While waiting for his scores with partner Lindsay Arnold following the first dance of the night, an Argentine Tango, host Erin Andrews reminded the audience of just how hard it can be for the stars who have to spend weeks away from home and from their families while training for this competition. She asked Calvin if there was anything he wanted to say to his young son Caleb, who he's had to spend a lot of time away from recently, as Caleb lives in Atlanta. Calvin started to say that he wanted to say happy birthday, because Caleb will be turning three in a couple of weeks, when Erin interrupted. "Why don't you tell him yourself?" And then a tiny adorable person ran up and hugged Calvin and the matching grins on both of their faces were probably the best thing to happen to America in the past year.

The unabashed joy on both of their faces was possibly the cutest moment in Dancing With the Stars history, which is definitely saying something. It's hard for parents to be away from their young children for such long stretches, so this was a great moment to watch.

Caleb made his big appearance right after his dad's first dance, so we hadn't gotten to the all-important freestyle round yet. For the Argentine Tango, Calvin and Linsday got a total score of 35 out of 40. It wasn't the perfect score they were hoping for, but it was only one out of two chances to prove themselves. And as Erin said, he probably didn't even really care about the score after getting the chance to see his son.

At the very least, the finals are upon us, which means that Calvin gets to be reunited with little Caleb for good starting on Wednesday.