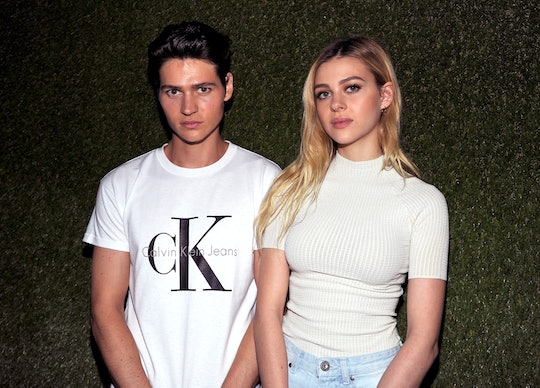 Calvin Klein has made headlines before for the its provocative and controversial advertising style, which are usually coupled with sexually suggestive taglines. Just recently, the design house found itself in hot water once more for a newly released Calvin Klein “upskirt” ad which has sparked outrage online, with many suggesting the ad is comparable to pornography. The company posted the upskirt shot on Instagram on Tuesday, which showed a 22-year-old model in dotted Calvin Klein underwear. While the advertisement may be considered offensive, it gives parents an opportunity to teach an important lesson and talk with their children about consent.

The words “I flash in #mycalvins” lay over the photo and the Instagram caption reads “Take a peek…” The advertisement is part of larger campaign — including Kendall Jenner and Justin Bieber — where models insert their own words into the “I___ in #mycalvins” phrase.

The controversial photo of 22-year-old model Klara Kristen has drawn many comments on social media, some calling the image “disturbing.” One commenter wrote that image is an “advertisement for rape culture.” Another commenter wrote, “At first glance I thought this was child pornography. #calvindecline.” Some have gone as far as to say that they will never purchase Calvin Klein clothing again. Whatever the case, it's sparked an important dialogue — one that all parents should note.

The majority of comments on the company's Instagram garnered a negative reaction, but some found the image “beautiful” and more not quite sure what the uproar was all about. Some said the image was just a part of being in the fashion industry.

This particular photo shoot may be considered just a typical day in the fashion world, but the outrage on social media shows something is not right about the direction of this advertisement. Yes, Calvin Klein has been known to push the limits in the past and this upskirt photo clearly does that for many.

Every day, women in cities all over the world hold their skirts as they walk up stairs and stand nervously on subways with the fear of someone trying to “take a peek.” This is an issue so prevalent in today's society that cities, like Tokyo, have implemented women only train cars. Officials in New York have launched campaigns to warn women of "upskirting" as the weather gets warmer. With that in mind, the new ad seems a little out of touch.

Of course, Davis isn't exactly wrong: Sex sells and this isn’t an unfamiliar concept in the modeling world. With most jobs, models sign a contract and essentially consent to their image being used. But even though this model was compensated and consented to this photo it doesn’t make it right in everyday society. These kinds of shots sadly happens far too often without a woman’s consent or knowledge and the advertisement is a reminder of that extra step of caution women need to take in their daily lives.

Parents should use this advertisement — and the larger conversation it's prompted — to illustrate when consent is needed, as a adult and as a child. "Upskirting" is a crime that can lead to jail time and registration as a sex offender, so if something seems off then it should be reported. It's important for young women to know and be vigilant about this because, sadly, there are creeps in the world who might take advantage of someone's naivety.

While the image has been considered “pervy” and “sexist,” it can also serve as a reminder to parents to teach their kids regularly about respect and consent. Of course, the model in this case consented and that was her choice. But it’s not okay to take a photo up a woman’s skirt without her knowledge and it’s important for young ones to know that. They have the power to say yes or no.