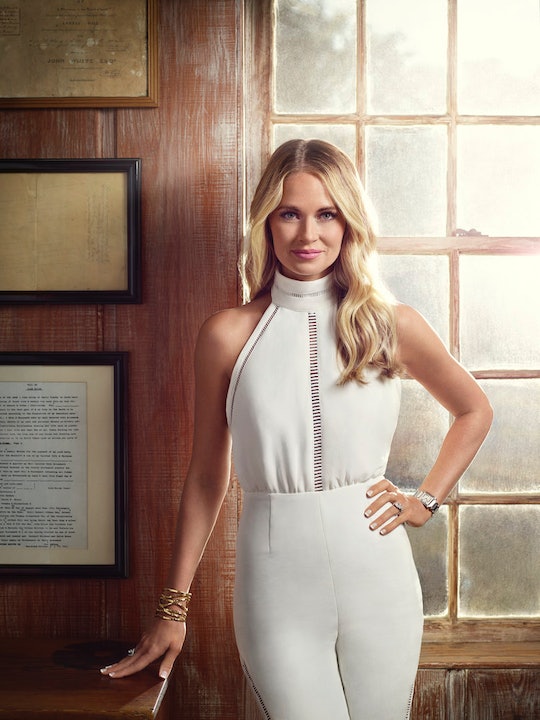 Cameran Eubanks On The Days After Giving Birth: It Was The Worst Two Weeks Of My Life

Somewhere in the last 20 years, we've redefined what it means to "get real." Granted, "unscripted reality" shows that have as many producers as they do roses on Night One make it easy to lose sight of reality. Cameran Eubanks, star of Southern Charm (which returns April 5 at 9 p.m. on Bravo) — and 2004 Real World: San Diego roommate — is no stranger to being brutally honest, despite the hairspray haze around her particular industry. Cameran has a platform, she has a new baby, and, instead of being polite, she's getting real.

You don't need to be a fan of Southern Charm to appreciate Cameran's honesty, though it helps; the show is hilarious and Cameran is the Greek chorus calling people out on their BS onscreen, as we call them out from the comfort of our couches. Her journey on the show has gone from being newly married, to not wanting kids, to now having a kid — all while nurturing some of the adult man-babies on the show (and her neighbor's dog, Elvis). Her experience is inspiring and crucial because very rarely do you see a woman on such a platform discuss not wanting kids. It was a huge storyline for Cameran, and for fans of the show who may have felt the same way, it was important to see themselves in someone with such visibility. Now that Cameran has a daughter, Palmer — born in November 2017, her platform for addressing issues pertaining to mothers, specifically the stigmas that surround the veiled (and totally fake) perfection of motherhood, has just gotten bigger.

And she takes that platform seriously.

"I even cried to my husband one night, 'Why did we do this, we had a great life. We've ruined our lives.'"

"You see [in movies and on social media] that the first few days with a newborn are just this idyllic time — everything is puppies and rainbows," Cameran tells Romper in an interview over the phone. "For me, that could not be further from the truth."

According to Cameran, those first "idyllic" days with her daughter were actually anything but. "It was, probably, the worst two weeks of my life, if you could believe it," Cameran says, noting that she doesn't think she had postpartum depression, but "definitely what they call 'the baby blues.'"

"I even cried to my husband one night, 'Why did we do this, we had a great life. We've ruined our lives,'" Cameran says.

Before giving birth, Cameran took to Instagram to tell her almost 700,000 followers her plans on breastfeeding her daughter, only because so many people were asking her. She detailed to fans that she would try to breastfeed her child, and if that didn't work, she'd pump. If the pumping wouldn't work, she'd formula-feed her child (with no worry in mind). And if formula feeding didn't work, Cameran humorously ended the video by saying she'd go to Chick-fil-A and buy a number three value size, put it in a blender, and spoon-feed the baby. Three months after giving birth, Cameran's posted a note to Instagram informing her followers that she had stopped breastfeeding. She was shamed for the decision, but as she said in her note, she gave it a "good 3 months," and had decided to "retire [her] boobs."

"I think more women actually feel the way that I did ... they're just so terrified for being judged or vilified."

Cameran's honesty about pregnancy, postpartum life, and health conditions has led to an outpour of love and support for the Bravo star. Women would thank Cameran for "giving them permission" to know it's OK that they didn't enjoy breastfeeding. Cameran has also found an online community of supporters (and thankful followers) after opening up about living with Hyperhidrosis, a medical condition also known as excessive sweating, something she's lived with since childhood. "People paint this picture perfect world [on social media and blogs] and it's just so unrealistic," Cameran says. "Women are shamed now more than ever to live up to this lifestyle that just does not exist."

Shaming is a very prevalent part of our online culture today — but it expands beyond just a comment on an Instagram post. In fact, according to a study by BabyTalk magazine, 33 percent of breastfeeding moms who took a nationwide survey said they felt bottle-feeding was "selfish" and "lazy." Thankfully, people like Cameran are able to destigmatize issues that women are often shamed for. "I think more women actually feel the way that I did, they just don't admit it ... because they're just so terrified for being judged or vilified."

If you look through Cameran's Instagram, you're immediately hit with a woman who adores and loves the new addition to her family. But, beside that love (literally, the photo right beside the family portrait), there's another side of reality. There's the Instagram video that we've all wanted to post about taking some personal time in the parking lot of a TJ Maxx. There's the goofy selfie where the week old mom sarcastically addresses the "zero pain in [her] crotch whatsoever." Cameran isn't reinventing the wheel by talking about being a mom, but when it comes to her new role, she's finding a space for all moms to talk about how, sometimes, motherhood is a real pain.