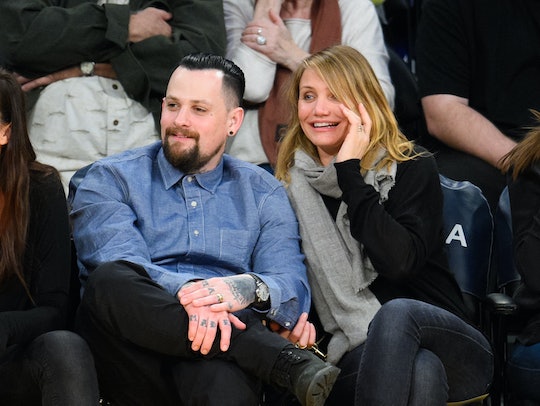 Two weeks after the entertainment world was gifted with a baby-sized New Year's surprise, more information is being revealed about one Hollywood couple's latest addition. The full name of Cameron Diaz and Benji Madden's newborn daughter has been revealed and it seems the newest member of the Madden family has more than one unique twist to her name.

While Diaz and Madden did reveal their daughter's first and last name while announcing her birth over social media earlier this month, the newborn's middle name remained a mystery. Now, however, a birth certificate obtained by The Blast has shown that the couple gifted their daughter with an extra special moniker containing, not one, but two middle names. The full name of Diaz and Madden's daughter is Raddix Chloe Wildflower Madden, The Blast reported.

Although nothing has been confirmed, a number of media outlets including US Weekly have speculated that the name Wildflower could be a tribute to Drew Barrymore. Diaz and Barrymore, who released a memoir titled Wildflower in 2016, have maintained a deep friendship since they starred in Charlies Angel's together in 2000. In fact, in 2018, Barrymore told ET that she and Diaz were "more than best friends."

"She's my sister," the entertainment news outlet reported Barrymore said of Diaz. "We have much more of that kind of relationship; we're very honest with each other. We push each other. And we've had the majority of our lives spent side by side, really going through what real life is, which is an everyday high and low, and we just have each other's backs."

As The Blast reported, Raddix was born Dec. 30, 2019 at 1:58 p.m. local time at Cedar's Sinai Medical Center in Los Angeles. Diaz and Madden announced their daughter's arrival in a New Year's message shared over social media on Jan. 3. "Happy New Year from the Maddens," the couple wrote in a joint statement posted to their respective Instagram accounts. "We are so happy, blessed and grateful to begin this new decade by announcing the birth of our daughter, Raddix Madden. She has completely captured our hearts and completed our family."

Although overjoyed, the couple went on to say they had no plans to share additional details or pictures of their daughter. "While we are overjoyed to share this news, we also feel a strong instinct to protect our little one’s privacy," their statement read. "So we won’t be posting pictures or sharing any more details, other than the fact that she is really really cute!! Some would even say RAD."

Given the couple's quest for privacy, it may be a while before the world learns anything else about little Raddix Madden.