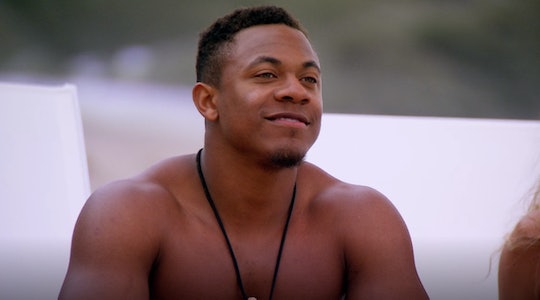 Season 3 of Ex on the Beach is in full swing, and it’s bringing fans plenty of buzz-worthy drama. One of the most talked about celebrity singles in the house this time around is Cameron Armstrong, and it’s probably because his boyish charm and questionable relationship decisions don’t always match up. If you’re curious about his past and present, you may be looking to Cameron from Ex on the Beach’s Instagram for clues.

Unfortunately, Cameron has his Instagram set to private, so you won’t find any answers there. However, you can learn a little bit more about him from his MTV profile. It describes him as a “true entertainer” whose TV credits include The Rookie and Boy Band. “Cameron's many talents do not include juggling,” the bio reads. “He tried to keep a girlfriend while living with his Ex, but he couldn't keep all the balls in the air, and his relationship hit the floor. Having one Ex as a roommate is complicated enough, but if both ladies show up in Malibu, Cameron's living situation may be twice as complicated.”

In the Season 3 premiere of Ex on the Beach, Cameron introduces himself in his own words, admits he typically likes trophy girls, and claims he wants to finally put his past behind him. “I’m coming to Ex on the Beach because I need to figure my life out,” says Cameron. “I actually live with my ex-girlfriend currently, her name is Ariana. There definitely is some convenience with living with your ex. Lyfts are expensive, it’s much more convenient to walk just right next door and hook up.”

He says his other ex, Alexis, broke up with him four weeks ago, and he attributes the breakup to his living situation with Ariana. “I want to have my cake and eat it too,” he confesses. “I like cake.” Well, all of his so-called “cake” comes to a head on the show, when both Ariana and Alexis arrive at the Malibu house.

In the Sept. 5 episode, the trio sits down to hash things out, and Cameron’s other roommate, Jocelyn comes by to give her own accounts of Ariana and Cameron’s relationship. Joceyln reveals that Cameron took regular showers with Ariana while he was dating Alexis, and he even told her he would marry her. She also noted that Ariana is the one who pays Cameron’s rent, which makes his whole “cake” analogy a lot clearer.

Oddly enough, the only part that bothers Alexis is the fact that cameron showers with Ariana, and that’s the only thing she questions him about. When asked to choose between the two women, Cameron chooses Alexis, shocking both Ariana and the rest of the house. Eventually, at the end of the episode, the house mates vote Alexis out, and advise her to work on herself before getting into another relationship.

In a preview for the Sept. 12 episode, Kenya warns Ariana about Cameron’s manipulative behavior, and calls him out for the head games he’s playing with her. If Meiche does take Ariana on a date, it’s going to be interesting to see what Cameron’s reaction is and how he feels about Ariana moving on. Maybe he’s afraid to lose her, or maybe he’s just scared she’ll stop paying his rent. Whatever it is, fans can tune in through the rest of the season to learn more about Cameron and see his relationship drama unfold.