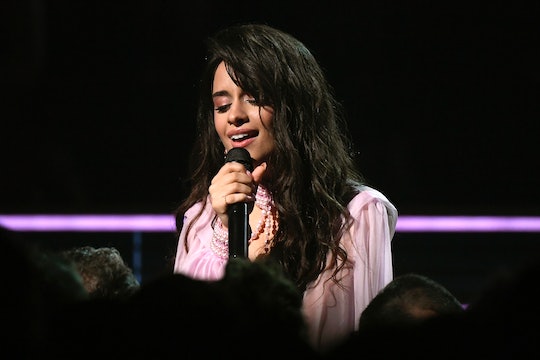 Camila Cabello Sang To Her Dad At The Grammys, & Literally Everyone Was Sobbing

One thing's for sure: The tears flowed freely Sunday night at the Staples Center in Los Angeles. This was thanks, in part, to the fact that Camila Cabello sang to her dad at the Grammys and literally everyone was a sobbing mess by the time her song was over.

Jim Gaffigan introduced Cabello onstage, mentioning that he himself is a father of five — and also noting that her song was for all the dads and their daughters. However, audience members and viewers at home couldn't have possibly prepared themselves for what was to come. Because although Cabello was nominated for a Grammy for "Señorita," that wasn't the song she performed at the awards show on Sunday. Nope.

Instead, she sang "First Man" — a song about a daughter's love for her father. And guys, she did so while a video montage of herself and her dad, Alejandro, played on a big screen behind her. Pretty much everyone lost it when Cabello walked into the audience and sang directly to her own father as he wiped tears from his eyes.

Who could blame him? Just take a look at the sob-worthy moment below.

Cabello's song is a ballad — sung from a daughter to her father — to assure her dad that he was the first man who loved her, even though she has now fallen in love with "the one." Here's a sampling of the lyrics:

In case you were wondering, the reaction on Twitter was pretty much unanimous. Because it gave viewers all the feels. Some people were so moved emotionally that they were at a complete loss for words and merely shared the video. Like this person who tweeted, "Camila Cabello singing to her dad at the grammy’s. that’s it. that’s the tweet."

Others were openly weeping after witnessing Cabello's father struggling (and failing) to keep it together as his baby girl stared deeply into his eyes singing. Another Twitter user wrote, "OHMYGOD I JUST SAW THIS WITH NO SOUND COZ IM IN CLASS BUT IM CRYING LIKE NO JOKE IM CRYING IN CLASS WHAT THE FRICK CAMILA CABELLO WHY."

Yet another person tweeted, "Camila Cabello’s performance straight up had me ugly man crying."

Yep, I'm calling it right now: "First Man" will be the father-daughter dance song at wedding receptions for 2020.