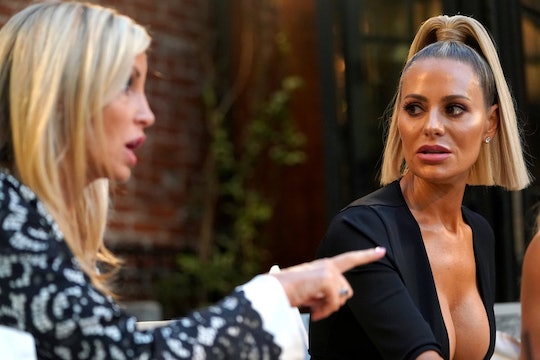 Camille Makes Some Shady Comments About Dorit's Finances On 'RHOBH'

Even the closest Real Housewives relationships ebb and flow, but Camille and Dorit on Real Housewives of Beverly Hills can't seem to get through more than a handful of episodes without arguing, and conflict rears its head again on the Jun. 25 episode. In a preview clip, Lisa Rinna calls Camille out for speaking negatively about Dorit in the past, and, as you can imagine, dredging up old fights does not get these two Housewives past their issues.

For her part, Camille admits, "Oh yeah, I've said some things," saying to Dorit, "I didn't trust you. I didn't know where you were getting all this money from."

Dorit seems as stunned as anyone that Camille was concerned with the origins of her wealth. While other Real Housewives have been known to throw some shade when their castmates' cash flow seems dubious, the Beverly Hills bunch never really seems to ~go there~. It's a confusing moment, and all the preview clip gives us is Camille cryptically saying, "People want to know what I know," while Dorit looks on, puzzled.

I'm sure we'll get much more information on what exactly is going on there when the episode airs in full, but this isn't even close to Camille and Dorit's first altercation.

Back in Season 8, Dorit freely admitted to indulging in too many tequila shots on a 110-degree day, which resulted in her jokingly calling Camille "a stupid c*nt" in front of all the other Housewives and their spouses. Dorit's delivery did feel like a poorly executed joke, rather than a malicious attack, but the incident was brought up again and again in Camille's confessional interviews. Unfortunately, it sounds as if their conflict didn't simmer down between seasons.

In January of 2019, People reported that Camille and Dorit got into a fight at Andy Cohen's baby shower, of all places, which took place after Season 11 wrapped, but before the reunion filmed.

“I witnessed, it was a verbal altercation!” Andy said on his SiriusXM radio show after the event. "I was walking by Erika earlier and she goes, ‘Get the cameras! Get the cameras!’ Because Dorit and Camille were going at it at the end of the table,” he added. “I said, ‘Ladies, shut it down. Save it for the reunion!’ And they did seem to shut it down.”

Earlier this season, Lisa Rinna revealed to the group that Camille had been talking about Dorit an awful lot behind her back, while being friendly to her face. In fact, it was something of a running theme with Camille — remember her unflattering comments about Lisa Vanderpump's dental work? Her penchant for faking niceness is definitely catching up with her, and Kyle Richards may have put it best when she said, "If someone does that, it's like, well what is she saying about me?"

There's been some speculation that perhaps the reason Camille is setting up so much drama this season is because she's salty about being demoted from main cast member to "friend of the Housewives" back in Season 3. Some suggest she's struggling to remain relevant, and this is her way of generating storylines. Whether or not that's true, a public airing of grievances is definitely on the horizon — if not during the remainder of the season, then at the reunion show.