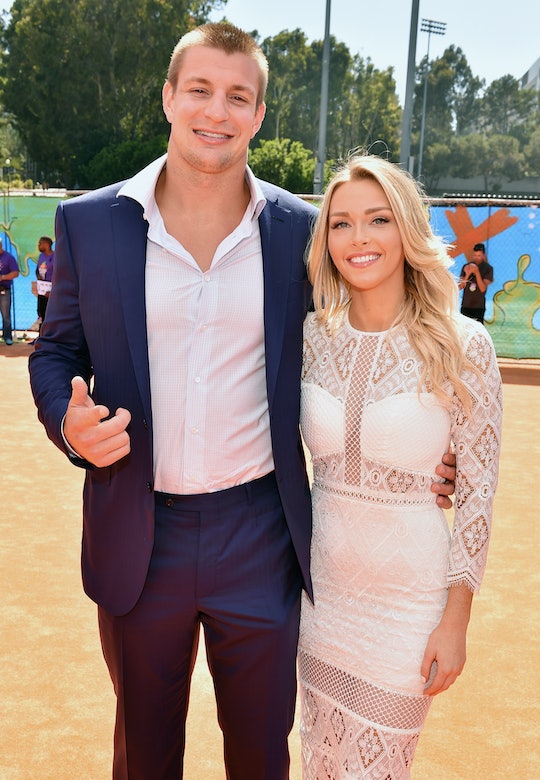 On Sunday, Feb. 3, Super Bowl 53 kicked off at Mercedes-Benz Stadium in Atlanta, Georgia. For so many players, the day was truly a dream come true. Because let's face it; just making it to any Super Bowl is pretty much the ultimate goal for any professional football player. Being there on that field, supporting their team is a great honor and something to take pride in— regardless of the outcome. And the girlfriend of New England Patriots player is ridiculously proud of her man. In fact, Camille Kostek's sweet message to Rob Gronkowski during the Super Bowl is ridiculously cute.

As the New England Patriots and the Los Angeles Rams kicked off the big game on Sunday, the Sports Illustrated swimsuit model took to Instagram to share a photo of the herself and Patriots tight end, writing, "Can’t express how proud I am of this guy. Now LFG #SUPERBOWL53." Kostek's followers promptly melted from how freaking adorable she and Gronkowski are in the picture. One Instagram user wrote, "Omg I’m in love with you both."

Another person commented, "My heart."

I mean, seriously. How incredibly cute are these two lovebirds? See for yourself!

Later on during the game, Kostek shared another supportive Instagram post for her NFL player boyfriend. "Pats nation right now. Thanks for capturing my proud gf moment @mrsmayo51," she wrote, alongside a video of herself doing a victory dance of sorts while flaunting Gronkowski's jersey.

In case you were wondering, Gronkowski and Kostek are pretty much #relationshipgoals when it comes to how supportive they are of each other. The swimsuit model is a former New England Patriots cheerleader, according to Cheat Sheet. However, she and Gronk didn't actually meet until after she moved on from that gig in 2015. Since they've been together, Kostek went on to win the SI Swim Search contest — during which she beat out 5,000 other women who submitted Instagram video submissions, according to Boston.com, and then won over fans' votes, too.

As it turns out, Gronkowski was incredibly proud of his girlfriend for this accomplishment. "It feels just unreal to say my girl is a Sports Illustrated Swimsuit model," Gronk told Sports Illustrated in October. "It's just unreal the work she's been putting in and the workouts she's been doing to stay in shape...to keep the booty juicy! She's always been putting in the work and always the time, and she definitely deserves it."

According to CBS Sports, Gronkowski is among the players involved in Super Bowl LIII who are potentially considering retirement. "Yes. No. Maybe so," Gronk answered when he was asked about the possibility earlier on this week, CBS Sports reported. This comment came on the heels of him seemingly acknowledged the possibility of the rumors being true. "I don't know how you heard about that," he responded when asked if he was calling it quits after the Super Bowl, according to the publication.

Whether or not Gronkowski ultimately decides to call it quits and enter into retirement following the New England Patriots' big win at the Super Bowl, I have little doubt that Kostek will remain his biggest fan.