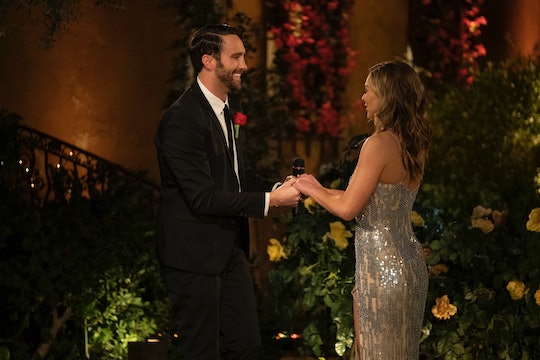 Who could forget Cam, the guy who "freestyled" for Hannah when she was first announced as The Bachelorette during her "After the Final Rose" special. The stunt earned him a rose before the season officially began, but on night one, he came prepared with yet another verse. Cam's rap on The Bachelorette reminded fans that they're in for a whole lot of cheesy rhymes between him and Hannah before the season is through.

Of course, Cam's first rap echoed Hannah G.'s hometown date with Colton, where Bachelor Nation learned that she and her dad love to perform awkward freestyle raps at the dinner table — so wholesome! But there's a vast chasm between running family gags and subjecting an entire network television audience to some cringeworthy amateur rhyming. Then, there's the fact that Cam keeps calling his particular skill "freestyling" when what he's actually doing is performing an already written and rehearsed rap. "Freestyling" is making up a rap on the spot. Words mean things and bastardizing the musical traditions of other cultures is an awkward look, at best! Luckily, Twitter got to dunking on Cam quickly, and hopefully he keeps it to a dull roar for the rest of the season.

Also, for those of your curious about the content of his second rehearsed rap, I went to the trouble of transcribing it, so you would never have to listen to it again. Here are Cam's bars:

"I've gotta keep it fresh like I'm comin' out the limo

What you know about me? This the rap demo

It's your boy Cam and I'm back on the mic

I'm trying to live it up like I'm living the hype

What you know about me, got a soul worth saving

There's one thing I gotta say, I got more flow

This the final rose and I'm ready to go."

After he finished, in lieu of a mic drop, he blew a handful of rose petals in Hannah's face. Of course, she loved the whole thing, especially that reference to University of Alabama football coach Nick Saban, and she did not appear to regret her decision to give Cam a rose.

Later, during their one-on-one time at the cocktail party, Cam actually snagged a kiss from Hannah — the first of three! Admittedly, Cam's kiss contained the least amount of chemistry, and I actually don't see him going very far. But it's clear that Hannah finds him sweet and fun and they're probably going to be very good friends at the end of all this.

The other two kisses went to Luke P., who went on to get her first impression rose, and Connor S., with whom she seemed very smitten right off the bat. The most dramatic elimination of the night went to Scott, who got cut before the rose ceremony for having a girlfriend back home. As for Cam, "I got more flow" implies Bachelor Nation will have to bear witness to more of his skills, which no one seems prepared for.