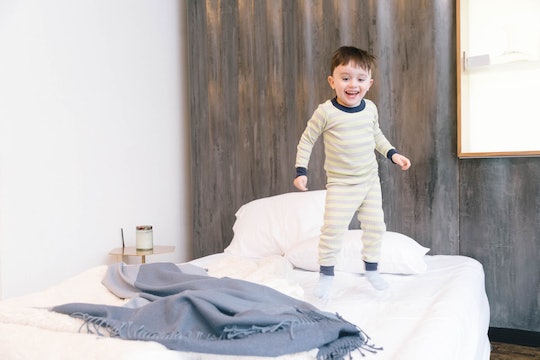 Can 2-Year-Olds Have Sleep Regressions? Here's What Experts Want Toddler Moms To Know

Sleep regressions have become a regular part of the overall parenting vernacular. So, now that we've put a name to the horrible thing that happens when you're seemingly easy-to-bed baby decides to forego sleep for an undisclosed amount of time, it's time to combat the notion that only babies experience sleep regressions. So, if you've staring your baby's second birthday in the face and asking yourself, "Can 2-year-olds have sleep regressions?" prepare yourself. Turns out, you poor, sleep-deprived parent you, the answer is a resounding "yes."

The Baby Sleep Site lists a number of reasons why 2-year-olds may be suffering from a sleep regression, including nightmares, longer waking time, normal life transitions, and early potty training that can present a change in what a toddler has come to think of as a set schedule and/or routine.

The same site, however, urges parents to, "be careful about chalking everything up to this sleep regression (or any other regression phase, for that matter!) If you’ve spent the last year and a half waiting for your “baby” to outgrow her poor sleep habits, you’re dealing with more than just a sleep regression."

The American Academy of Pediatrics (AAP), and their sister site HealthyChildren.org, don't specifically address the 2-year-old sleep regression. It's a safe bet, however, that you should check with your child's pediatrician if you have any concerns about an abrupt change in their sleep.

As for how to help your kiddo with this terrible toddler sleep trouble? Parenting has all sorts of helpful hints, including the following:

"Try adding yoga after bath time and pajamas but before reading a story. Participate with your child, so the two of you are relaxing together."

Parenting also encourages parents to be consistent when setting bedtime boundaries, saying, "(O)nce you've said 'one more,' that's it. She may plead or whimper, but you'll both be better off if you can stay firm. Say goodnight and mean it." In other words, stick with what's been working for the last two years (give or take), and remember: this is probably the last sleep regression you'll ever have to deal with. #ParentingWin