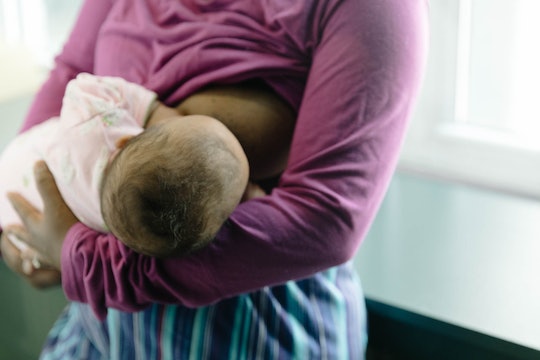 A bad latch can contribute to a number of other breastfeeding issues for both mother and baby. Because the nipple plays a huge role in the latching process, moms with small or flat nipples may wonder, can a baby latch if you have small nipples.

Well, you can breath a sigh of relief. Lactation Consultant Lindsay Kempenich Greenfield tells Romper that small nipples don't cause breastfeeding problems because babies aren't "nipple feeding" — they're breastfeeding. If your baby's able to get his mouth around the nipple and latch around the areola, he shouldn't have any issues breastfeeding, according to La Leche League International. Small nipples could, however, be confused with flat or inverted nipple issues.

If you aren't sure what your nipple status may be, there's a quick way to tell if you have flat or inverted nipples, according to What to Expect. Place a finger on either side of your areola and lightly squeeze – if your nipples stay in a resting position instead of popping out, they're flat, and if they retract inward, they're inverted. That being said, lactation consultant and registered nurse Tera Kelley Hamann tells Romper that nipples are only flat or inverted if they stay that way after stimulation, so you may want to stimulate the nipple before trying the test.

Additionally, most types of flat or inverted nipples don't cause problems with breastfeeding, but there's always a chance you'll have some latch difficulties, according to the aforementioned LLLI article. For moms experiencing potential difficulty from small, inverted, or flat nipples, here are some tips to help with latch.