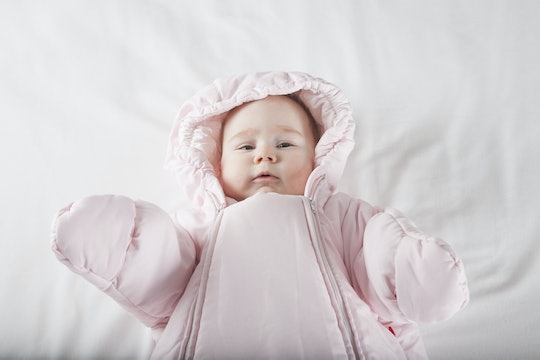 Babies in snowsuits are pretty much the cutest. They look like little Stay Puft Marshmallow men covered in snow. Also, can we just talk about the way they toddle in them? It's a wonder they stay upright if they're walking. If they can't walk? Just as cute. But, with all of those layers of neoprene and down and Gore-tex, it gets kind of steamy inside sometimes. Can a baby overheat in a snowsuit? How on earth would you know?

As it turns out, it's actually pretty easy for kids to overheat in snowsuits according to the American Academy of Pediatrics (AAP). Their rule of thumb for older babies and children is to dress them in as many layers as you're dressed in to stay warm, and then add one additional layer. Their core should remain warm, but their hands and feet should be a little cooler. With teeny ones, the rule still follows that their core should be slightly warmer than their extremities, but also that the layers you choose should not weigh them down too heavily or put them at risk for suffocation by being too loose. Snowsuits, while adorable, are only usually necessary when playing in the heavy, wet snow. Otherwise, it's just about keeping them in removable layers and warm enough to be comfortable while not making them sweat.

Strangely enough, overheating can lead to not just dehydration and the dangers that poses, but it can also lead to frostbite. I know, that sounds weird, but hear me out. When you get hot, or if your baby gets hot, they're going to sweat. Any mom who's ever had to peel a onesie off a sweaty or feverish baby knows how much those little humans can soak up an outfit. When that sweat cools down, it does so in a hurry. Water cools you down 25 times faster than air, according to NYU, but that's not all. It also gets trapped in the fabric of their socks and onesies and even their diapers, rushing all of that cold air to their vulnerable bits, putting them at risk for frostbite, according to Dr. Spock's Baby and Child Care.

Having suffered first-degree frostbite more than I care to admit, I will tell you it's a miserable experience. It stings like you can't possibly imagine, and when the feeling comes back in full? It's like having your fingers tattooed. By a shark.

Can a baby overheat in a snowsuit, even if they're playing in the snow? Barbara Ray, a pediatric nurse in Butte, Montana tells Romper, "We actually see it quite a bit, at least three or four cases each year. While it's normally no big deal, it can be dangerous. You have to be vigilant checking on your baby's fingers and toes and core. Make sure they're not sweaty. Check their brow and neck as well." She says that if your kids are older and can communicate with you, ask them frequently how their hands and toes feel. If their toes get sweaty or go numb, that's the first sign things are starting to go south. "It's important to keep feet and hands warm and dry, but not sweating."

While you may not see the winters Montana gets in your area, the advice remains the same. Keep an eye out for sweaty babies, and don't shove every winter accessory over on them if you're just in a jacket and jeans. Remember: dress them how you would dress yourself, and then add an extra layer or two depending on their age. As long as their chest and tummy are warm but not sweating, and their extremities are cooler, you're good to go.

More Like This
The Best Halloween Family Pajamas To Match Your Boos
How Much Hair Loss Is Normal? 9 Signs You’re Losing Too Much Hair
What Is RSV?
Are Babies Lonely In The NICU? Here’s What Experts Say