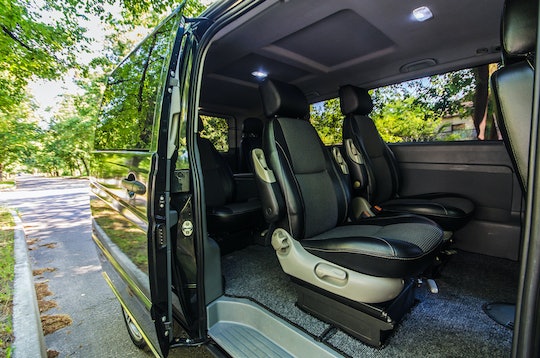 When it comes to your kids, it's hard not to worry over every single thing. Whether you're thinking about which soap to use, what to feed them, or where to send them to school, the small issues sometimes seem as overwhelming as the larger ones. So, when it comes to issues of your babies' safety, especially car safety, it's really no surprise how consuming some questions might be. Not only are you wondering which car seat is best, or which car is safest, but also, can a baby sit in the third row of a car?

According to Consumer Reports, there's no clear research-based data on whether or not third rows are safe or unsafe for babies and car seats. In addition, third rows are often unoccupied, and without a real cause for concern, automakers are not required to perform rear-crash tests with dummies.

The safety of children in the third row of a car, it seems, really depends on the type of car you are driving. As Consumer Reports noted, most of the time, third rows are available in larger, heavier vehicles (like vans and SUVs), which generally offer more crash protection than smaller vehicles. But, there is a growing trend for smaller vehicles, such as hatchbacks, to offer a third row of seating.

The concern with car seats in third rows in smaller cars is that there is little crush space available between the back of the third row and the tailgate in case of a severe rear-end impact. According to The New York Times, without government oversight, the safety of third rows is left up to each individual automaker. Because of this, third rows don't often get the same safety features that may be available throughout the rest of the car. For instance, in many vehicles, side-curtain airbags don't reach the third row, and though third rows may offer three-point seat belts, those belts don't often have pre-tensioners that tighten belts in case of a crash.

Third rows are often unavoidable, especially if you have more kids in car seats than can fit in one row. According to Parents, there are a few things you can look for when considering a car with a third row. First, consider the distance of the third row from the rear glass. There are no regulations to say how far this distance should be, but it's safe to say that the closer your kids are to the crush zone, the more likely they are to be injured in a crash (by glass, impact, or both). Next, investigate safety features to ensure that vehicle protections extend all the way to the third row, including retractable seat belts and head restraints. Last, avoid rear-facing or side-benches, as car seats are only tested in forward-facing vehicle seats.

At the end of the day, cars are cars, and crashes and accidents are often beyond your control. The best you can do is to make calculated decisions that consider both your family's needs and safety, and go from there.