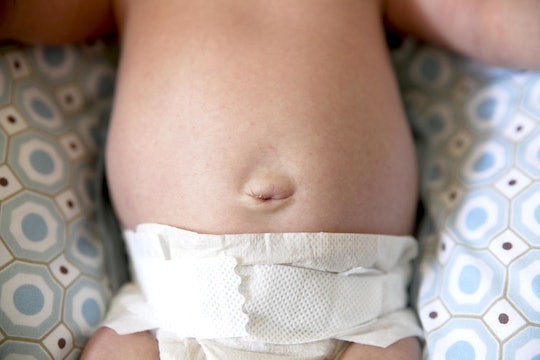 It's Rare, But A Baby's Belly Button Actually Can Change From Outie To Innie

When I was pregnant with my first, I gave very clear instructions to my husband, who was planning to cut the cord, not to give our daughter an "outie" belly button. Now, I realize this was a very silly thing to care about, but my anxiety about impending labor had to be directed somewhere, and for me, that was the belly button. I found myself wondering, does a baby's belly button change? Can you go from an outie to an innie? What are the logistics?

I'm about to blow your mind here, but how a belly button ends up looking — innie or outie — has nothing to do with the cord cutting. I know, mic drop. "As babies are growing inside the womb, skin grows around the umbilical cord,” said Michael Schoenwetter, M.D., a pediatrician in private practice near Los Angeles, in an interview with NewParent. “Some babies grow more skin, which results in an outie, and some grow less, making an innie.”

However, a look at the numbers reveals that innie belly buttons vastly outnumber outies. "Only 4 percent of those studied said they had outie-shaped belly buttons," according to Everyday Health reporting on the Belly Button Diversity Project, which has collected nearly 500 samples from belly buttons.

But aside from an umbilical hernia-related "outie" belly button eventually becoming an innie, you're basically stuck with the belly button you're born with (unless you decide to get a plastic surgery procedure called an umbilicoplasty). There's only one other instance when a belly button is known to transform and that is with pregnancy.

You may also experience another belly button phenomenon when your pregnant belly expands — your innie stretches really taut. "Sometimes a belly button will pop out. Sometimes it sort of caves inwards and lays flat," explained VeryWell Family. Either way, it's completely normal!