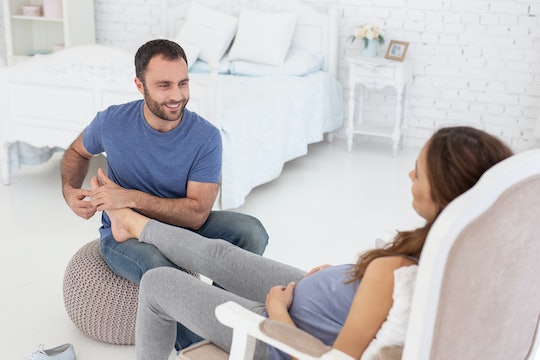 Of Course Pregnancy Calls For Foot Massages, But Here's Why You Need To Be Careful

There is a special sort of misery that accompanies the last days of pregnancy for many women. For me, I was tired, bloated, it felt like my belly was going to escape through my vagina, and I had contraction after useless contraction. I tried everything to evict my son. I ate disgusting eggplant dishes, walked miles across New York City, and I even had acupressure foot massages. I will admit I loved the acupressure the best, and at 38 weeks and two days, my son arrived. But, seriously, can a foot massage induce labor, or did it just feel really nice on feet exhausted from walking all the miles?

You don't have to look far to find websites that tout the ancient practice of acupressure massages to speed up your baby's arrival. It's actually a pretty common practice, noted Women and Birth Magazine. The idea is that there are places in your feet that are connected via nerve endings and blood vessels to your uterus. By massaging these specific pressure points, the practitioner is able to manipulate these pathways and stir up the energy between the two, causing contractions to begin. According to the article, this is a practice dating back thousands of years, originally performed in the Eastern Tradition of Chinese medicine and used in tandem with acupuncture, which works with the same mechanisms.

When I was pregnant, it was honestly hard for me to find a practitioner who would do the acupressure for me. I'd walk in, they'd take one look at my big, pregnant belly and turn me away. It wasn't until I did some real searching and sleuthing that I found a massage therapist and acupressure specialist willing to try her hand on me. Note that this isn't a practice covered by insurance, and it can be quite expensive if you go see someone professionally in lieu of trying to DIY the acupressure at home. When I had it done over 10 years ago, it was $65 per hour of massage.

The way it worked was that I went in every day for four days, and she would start by having me soak my feet in an aromatherapy bath of lavender and clary sage oil. After my half-hour of soaking, which, by the way, was pure heaven, she'd begin by kneading the ever-loving heck out of my lower calves. After she was done there, she'd work up and down my achilles' tendon, down through my heel, and eventually, press hard into the arch and balls of my feet. Honestly, at that point, you won't ask if a foot massage can induce labor because you'll be too worried if it can induce an embarrassing spontaneous orgasm instead.

However, according to Contemporary Theories in Clinical Practice, there is just not enough standardized, traditionally documented evidence to suggest that an acupressure foot massage can induce labor when you're full-term. But researchers noted that there is plenty of anecdotal information and enough to document that it can't be ruled out entirely. The biggest thing that should be mentioned is that these massages are shown to possibly bring on labor before 37 weeks, so they shouldn't be performed until the woman is at full-term.

The only non-pharmacological childbirth induction methods proven to be effective, according to American Family Physician, is prolonged, intense nipple stimulation and the stripping of membranes of the cervix by an obstetrician in office. Otherwise, it's all hearsay. However, a recent study published in Public Health Practice did find that a foot massage might help speed things up while you're in labor, so it might behoove you to employ a doula who knows how to administer acupressure or get your partner to study up — after discussing it with your OB-GYN. If that doesn't work, you can always try eggplant parm. I personally suggest holding your nose while you eat it.