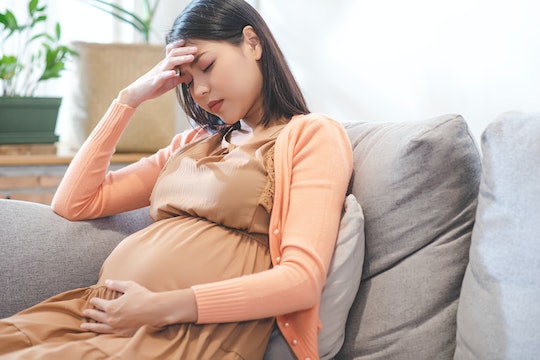 Back pain can also be a sign of stress. Shutterstock

Here's How Migraines Are Related To Preterm Labor, According To Experts

I suffer from migraines pretty regularly. When I was pregnant, the headaches, nausea, and blurred vision felt like they were pumped up on steroids. The migraines were hard and fast, and to be honest, they really scared me. They were so bad, that I wondered if a migraine can cause preterm labor.

I'm not alone in those pains. Migraines affect around 25% of women of childbearing age, according to the journal Expert Opinion on Drug Safety. Therefore, it's a pretty well-researched problem in terms of risks, treatment, and outcome. Research has shown that women who have migraines have a greater risk for multiple issues throughout their pregnancy, such as nausea, vomiting, dehydration, and even preterm birth, noted Headache. However, the reason for the increased risk isn't as cut and dry as it might seem. One could look at the research and say "OK, migraines can cause labor." But there's more to it.

I contacted Daniel Roshan, M.D., director of ROSH Maternal-Fetal Medicine in New York City, New York, and he tells Romper, "Migraine does not cause labor. However, stress can."

Like many things in pregnancy, it seems as though it is not the symptom or issue itself that is triggering the body to start labor, but the secondary and tertiary effects of that primary problem that are the culprits. Migraines themselves might not cause a woman to go into labor, but the subsequent nausea, vomiting, and dehydration, or the stress related to a migraine or that might be causing the migraine can manage it.

When I was pregnant, I had migraines on top of hyperemesis gravidarum, and they played against each other like the most evil version of dueling pianos that you can imagine. I would throw up all day and then proceed to become dehydrated, and as most people with migraines will tell you, dehydration is a huge trigger for migraines. It would lay me up in bed all night long, for weeks at a time with terrible migraine symptoms, to the point where I stayed in a room with blackout curtains, and slept with a night mask on my face.

I was warned early on by my OB-GYN that the dehydration that stems from this cycle is a real risk for preterm birth. Fortunately, I made it all the way to 38 weeks with my son before he was born, but I was hospitalized during week 36 of my pregnancy so that I could receive intravenous fluids. This was because during one particularly bad spell, I became so dehydrated that contractions began. It was terrifying. I was lucky that the administration of fluids was enough to chill everything out, but that's not always the case.

Lisa Gould Rubin, a certified labor doula (DONA) and childbirth educator, and founder of The Good Birth Project, which helps women with round-the-clock, in-person pregnancy and parenting support, agrees with the previous assertions. She tells Romper that while women with migraines are at a higher risk for preterm birth, the effects and mechanisms of the stress on the body from the nausea and vomiting are the real problems. "It is commonly held amongst birth workers that vomiting in labor, while potentially impacting dehydration, also helps to move the baby down with the added strength of the abdominal wall which engages in vomiting," she says.

If you think about it, your core gets a real workout when you're throwing up. It's a violent and forceful act that engages your whole body, but especially your core. There were times when I was throwing up so much in the end of my pregnancy, that my entire lower abdomen and back ached from the force of it.

So while the migraine alone might not be cause for concern, all of its partners in crime sure seem to be. It's definitely something to discuss with your OB-GYN or midwife.