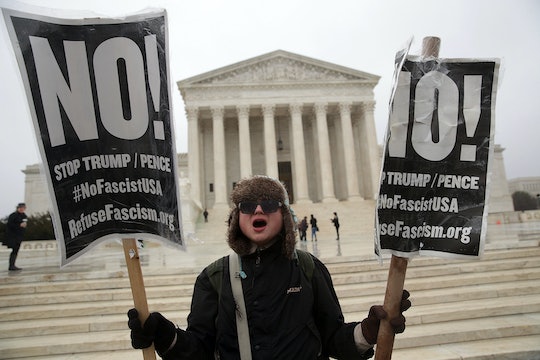 With President Donald Trump expected to announce his Supreme Court nominee Tuesday evening, politicians on both side of the aisle are preparing for the inevitable fallout. In the likely event of a partisan disagreement over Trump's pick, many are now wondering: Can a president appoint his own SCOTUS pick? While bypassing congressional filibuster rules would be a historically unprecedented move, it certainly seems possible.

Once Trump announces his appointee, a few likely scenarios will come into play. Senate Minority Leader Chuck Schumer said during a CNN interview earlier this months that “if the nominee is not bipartisan and mainstream, we absolutely will keep the seat open." Schumer didn't use the word "filibuster," but he said that Democratic senators would fight "tooth and nail."

A Supreme Court nominee can be confirmed with a simple Senate majority, but the Democrats will have the option of a procedural filibuster, which would change the requirement from a simply majority to a 60 percent majority. Republicans currently hold a 52-48 Senate majority; If the Democrats filibuster, eight Democrats would need to vote in favor of Trump's nominee. On Monday, Sen. Jeff Merkley of Oregon said that he plans to filibuster any nominee who isn't Merrick Garland, the federal appeals court judge who President Obama nominated last year. Infamously, Majority Leader Mitch McConnell led his party in refusing to hold confirmation hearings for Garland, thereby blocking the process entirely before a filibuster would even have been needed.

And so in the entirely plausible scenario that Democratic senators filibuster Trump's pick, what are the president's options at that point? Many are now speaking of the "nuclear option." It's a poor choice of phrasing, really, given that Trump has far scarier nuclear options, but here it's used as a metaphor to describe Trump's ability to bypass a filibuster. To pull this off, he would need to convince McConnell to change the rules of the Senate, forever, by getting rid of the filibuster for Supreme Court nominees.

There is precedent for eliminating filibustering. In 2013, Senate Democrats responded to Republicans' obstructionism of Obama's picks for federal circuit and district court judges by eliminating the filibuster for nominees to these lower courts. Conservative Washington Post columnist Marc Thiessen spoke out in favor of the nuclear option this week in an intense column, arguing without basis that Democrats will use the nuclear option whenever they're back in the majority, so it's therefore OK for Republicans to make the move now. "It is only a matter of time before the nuclear option is invoked," Thiessen wrote. "The only question is whether it will be invoked by Republicans now, or by Democrats later. So why wait?"

Ah yes, the old "let's do a bad thing because other people might theoretically do it later" argument. Given that bipartisan vitriol has become day-to-day politics, it does seem likely that filibustering and the so-called "nuclear option" will play out, painfully, over a course of several months. As for Trump, he is unsurprisingly in favor of the nuclear option, telling Fox News' Sean Hannity last week that he "would" pursue that strategy.

McConnell has not commented on whether he considers the "nuclear option" a feasible route. According to CBS News, McConnell is a "a devout Senate institutionalist" who might be reticent to support such a dramatic and potentially dangerous rules change. In the event that McConnell doesn't cooperate with Trump's desire to eliminate the filibuster, it's hard to say how far Trump might go to push his pick through.

At present, CBS reports that there are two likely frontrunners for Trump's nominee. Thomas Hardiman, a 3rd Circuit judge, is considered a conservative centrist, while Neil Gorsuch of the 10th Circuit Court of Appeals in Denver is considered a more conservative hardliner. The intensity of the battle ahead might depend largely on whether Trump's pick is viewed by liberals as a major threat, or by conservatives as a major boon.

And in the event that McConnell doesn't support Trump's desire for the "nuclear option," it's hard to say how far Trump would go to eliminate or somehow evade the current rules keeping the checks and balances of American democracy in place.