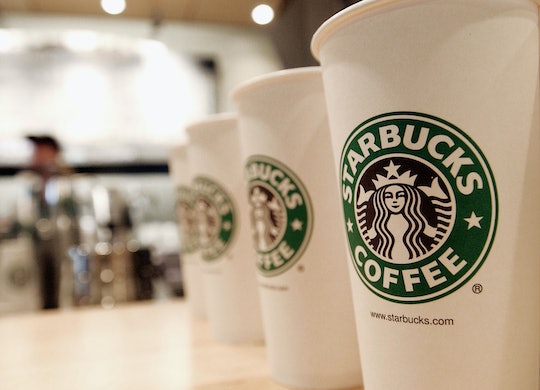 When You're Ready To Induce Labor, Maybe You Should Just Get A Pumpkin Spice Latte

Ah, Pumpkin Spice Latte season is officially here again. Starbucks describes the PSL as a "fall favorite," but I'd describe it more as a "cult obsession." If you've been waiting all year for this drink to come back, you're not alone. A grande PSL can do so many things: warm you up on a crisp fall morning, give you patience for a chaotic family Thanksgiving, and satisfy your sweet tooth. But... is there something else the PSL can do? Can a Pumpkin Spice Latte induce labor? It might sound crazy, but a few old wives' tales would point to yes. I looked at the research to find out for myself.

According to the Starbucks website, the PSL is a combination of espresso, milk, pumpkin, cinnamon, nutmeg, and clove. It's topped with whipped cream and the "pumpkin spice topping," which consists of cinnamon, ginger, nutmeg, and cloves. Interestingly enough, old wives' tales claim that both cinnamon and ginger can induce labor. Does this mean that your next stop after your local Starbucks is going to be the labor and delivery ward?

Let's break this theory down piece by piece, investigating the cinnamon aspect. In a 2017 interview with Romper, Dr. Sherry Ross, an award-winning OB-GYN and women’s health expert, said, "“I have not heard that cinnamon can induce labor, but will add it to this list of common myths of labor-inducing foods. Unfortunately, these recommendations are also known as old wives' tales. If any of these suggestions put a woman into labor, then it’s just a wonderful coincidence.”

However, it's important to realize that this applies to normal doses of cinnamon. The amount in a PSL is not enough to induce labor or cause any issues with your unborn child like preterm labor, but that does not mean it's a good idea to pop cinnamon capsules or overload your food with the spice. According to InfoBaby.org, a high amount of cinnamon can cause uterine contractions, and moms-to-be should limit their intake. One Pumpkin Spice Latte won't send you into labor, but a cinnamon overload could.

Fair enough. But what about the ginger? Ginger has been a popular herb for expecting mamas thanks to its anti-nausea effects during bouts of morning sickness. According to a 2016 study, "The best available evidence demonstrates that ginger is an effective and inexpensive treatment for nausea and vomiting and is safe." That said, there is no research showing any labor-inducing effects. Additionally, the actual amount of ginger in a Pumpkin Spice Latte (mixed into a topping and sprinkled onto your whipped cream) is incredibly low.

Megan Kirby, registered mother baby nurse and new mom herself, has both professional and personal experience on the topic. "Any mama-to-be deserves to treat herself and relax, so that feeling of oxytocin the second she takes a sip of a Pumpkin Spice Latte may be, just may be, all she needs to tip the labor scales in her favor," Kirby tells Romper. "But in all honesty, the best way to induce labor, outside of hooking up to some Pitocin in the hospital, would be lots and lots of walking, squats, some old fashioned prostaglandins (sex), or what worked for me... spicy food!"

She has the anecdotal evidence to back it up, too. "If PSL induced labor, then [my daughter] would've been here a month early... because I was downing those in September and she didn't come until Oct. 19," Kirby says.

If you're worried about the caffeine in a Pumpkin Spice Latte, I've got good news for you. According to The March of Dimes, pregnant women should "limit caffeine to 200 milligrams each day. This is about the amount in 1½ 8-ounce cups of coffee or one 12-ounce cup of coffee." According to the Starbucks website, a grande PSL only has 150 mg. You also have the option to order your PSL with decaf espresso, which brings that number down to between 3 and 16 mg of caffeine, according to WebMD.

So, at the end of the day, the cinnamon and ginger in your favorite Pumpkin Spice Latte is not going to bring your little one into the world any quicker. If you're hoping to drink your favorite fall drink without worrying about going into labor, you're in luck! You shouldn't drink more than one a day, but you shouldn't deprive yourself either.

On the other hand, if you're overdue and desperate to get that baby out of you, I say go get yourself a PSL. And while you're at it, have some sex, eat some delicious spicy food, and engage in a little nipple play. These might all simply be old wives' tales but hey... why not have a little fun and try them all?

Lete I, Allué J. (2016) The Effectiveness of Ginger in the Prevention of Nausea and Vomiting during Pregnancy and Chemotherapy. Integrative Medicine Insights, https://www.ncbi.nlm.nih.gov/pmc/articles/PMC4818021/.

More Like This
21 Pumpkin Spice Snacks & Treats To Buy Right Now
Eden Grinshpan On Getting Your Kids To Love Fish Eyeballs (Yes, Really!)
The Best Apple Orchards Near Upstate New York
The Cutest Petite Maternity Clothes From Amazon Under $40