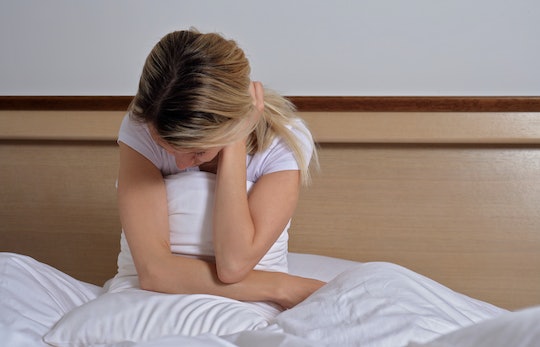 Can Queefing Give You An Embolism?

Most people probably have a story about their very first queef. When I first learned about queefs — the sound that a vagina makes when it sucks in air and then blows it back out — I was embarrassed just thinking about them. Since then I've learned that, although they are often loud and disruptive, they're a natural part of being a woman. However, that doesn't stop some questions coming up about their safety, like can a queef give you an embolism?

The question comes up more often than you might imagine, since a queef sucks in air through your vagina and an embolism happens when an air bubble in your blood causes obstruction of an artery.

"You know how people get nervous when there’s an air bubble in an IV? It’s the same concern," Dr. Mary Jane Minkin, a clinical professor of obstetrics and gynecology at Yale Medical School, told Women's Health. Despite the concern, however, Minkin noted that an air embolism due to queefing is unlikely. "I’ve been out of medical school for almost 40 years and have never had a case of that." That being said, she also noted that it's not uncommon to be concerned about this possibility, particularly when you're pregnant.

According to Self, some women actually enjoy the sound of a queef so much that they have their partner blow into the vagina so that they can then bear down and expel it. If that's you, no judgment for being into whatever you're into, but that might not be the safest habit when you're pregnant.

"With pregnancy, you get a huge increase in blood supply going to the vagina and cervix," OB-GYN Dr. Jamil Abdur-Rahman told SELF. "The blood vessels also tend to be a little more porous, so it's a bit easier for air entering the vagina to get into the vessels."

Even so, it's still a pretty uncommon possibility. Abhur-Rahman even said that he's only read about this in literature, but hasn't actually seen it in a patient. Your partner would have to purposefully force a lot of air up into your vagina for you to actually be at risk and, as long as neither of you is actually doing that, a queef should be perfectly safe.

One thing to keep in mind about your queefs is that they are not controllable the way a fart may be, and can actually happen outside of sex. The air inside of your vagina can also be forced out when you cough, laugh, or are straining during exercise. If you're prone to them naturally or simply enjoy the noise they make, it's good to know that queefs are (mostly) perfectly safe and not generally dangerous for you.

More Like This
Yes, It’s Possible To Get Pregnant If You Have An IUD
The Reason You Fantasize About Other People When You’re Married
13 Best Subscription Boxes For Couples
Is It Good For Babies To Be Exposed To Germs? It’s Complicated