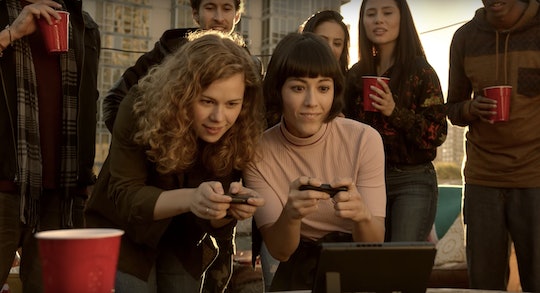 Can A Toddler Play With Nintendo Switch? The Mario Bros. Haven't Let Us Down Before

After much speculation about Nintendo's latest home console offering codenamed "Nintendo NX," the Japanese video game giant released a very exciting-looking teaser trailer for its forthcoming Nintendo Switch console. The video shows the Switch offering a seamless gaming experience from television to tablet gaming on the go — wireless controllers included. But there was definitely one glaringly obvious omission from Nintendo's slick trailer: Where were the clips of families playing? That's led some parents to wonder whether toddlers can play with the Nintendo Switch.

Nintendo's other console offerings, the Wii and Wii U, have always been popular with families. The Wii U itself, when first released in 2012, was specifically designed and marketed for family play. Nintendo is a family-friendly platform, and has largely remained so through its 33-year history as a gaming console maker. Nintendo's very first console was released in Japan in 1983 and called the Family Computer — Famicom for short. The Famicom would become the Nintendo Entertainment System released in North America just two years later. So will toddlers be able to get a crack at the Nintendo Switch? If past consoles are any indicator, then the Switch will probably be just as toddler friendly.

Besides the teaser trailer, Nintendo has been pretty tight-lipped about specs and pricing for the Switch console, due out in March 2017. British gaming website Eurogamer spoke with a Nintendo spokesperson in the United Kingdom who confirmed that these specific details, including game titles to be available at launch. The U.K. spokesperson vaguely responded that more details will be made available "at a later date, before the March launch."

After Nintendo NX patents were leaked online this summer, more information began to trickle out about Nintendo's mysterious new console before the official Switch announcement earlier this month. Electronic gaming trade magazine MCV also reported at the time that the Nintendo NX would launch with titles from popular franchises such as Super Mario, Zelda, and even Pokemon. Game dev Ubisoft announced on their company blog that their new Just Dance 2017 title, released on Tuesday, will also be made available for the Switch once it launches. These franchises — particularly Super Mario — are excellent indicators that the Nintendo Switch might just be a great gaming option for families with children of all ages.

There also seems to be one more interesting clue online about whether or not the Nintendo Switch will be toddler-friendly. Eagle-eyed gamers spotted a Nintendo Switch pre-order product page on the U.K. GameStop website. Not only did it include a stiff pre-order price point — £399.97 — but it also had a PEGI rating for the console as well.

PEGI is the Pan-European Game Information age-rating system for video games sold in Europe — basically the European counterpart to the U.S. Entertainment Software Rating Board (ESRB). The Nintendo Switch product page at GameStop U.K. carries at PEGI 3 rating, meaning it's kosher for kids three and up.

Gamer moms, dads, and kids rejoice, because it looks like the Nintendo Switch is going to be perfect for families of every age!