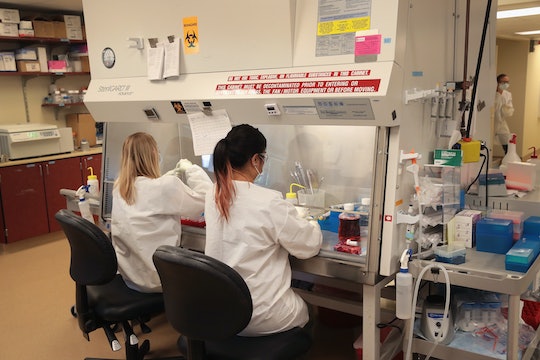 Can A Woman Transmit Zika To A Man? Everyone Should Protect Themselves

Although it might have seemed like the guidelines for Zika transmission were pretty straight forward, the Centers for Disease Control just reported that a woman can transmit Zika to a man through sexual contact, so it looks like everyone needs to take a step back and reconsider how they're protecting themselves from the virus. Until this week, health officials had warned that men were able to sexually transmit the virus to their female partners, but there had been no reported cases of the virus being transmitted from women to men.

The CDC is still investigating, but the agency reported that a woman in her twenties had been showing some symptoms of Zika, like "fever, fatigue, a maculopapular rash, myalgia, arthralgia, back pain, swelling of the extremities, and numbness and tingling in her hands and feet," went to her doctor, and tested positive for the virus. The woman also reported that her period was heavier than usual and that she had had unprotected sex with a male partner a day after returning from a Zika infected area.

Almost a week later, her male partner began showing the same symptoms and went to the same doctor as the woman who was diagnosed with Zika. He tested positive for the virus.

The woman and the man corroborated each other's stories — she had traveled outside the U.S., he hadn't, they had unprotected, vaginal intercourse, and did nothing else. The man said that he had had no other partners or mosquito bites in between having sex with the woman and the time he began showing symptoms. So the CDC has put two and two together, given the "timing and sequence of events," and are concluding that the woman transmitted Zika to the male partner, something that health officials initially thought wasn't possible.

The Zika virus is really only dangerous if you are pregnant or plan on becoming pregnant, according to the CDC. If not, the symptoms — like a rash and fever— pass within a week. But it's not harmless. Women who are planning on getting pregnant or of child bearing age are at the most risk, since the virus causes various birth defects, including microcephaly, in fetuses.

I hate to lecture, but if anyone is having sex with multiple partners (or even just one partner), there should be condoms or regular STI testing involved anyway. And any woman who can get pregnant should see a doctor and ask about Zika testing if they or their partner, male or female, start to show symptoms.